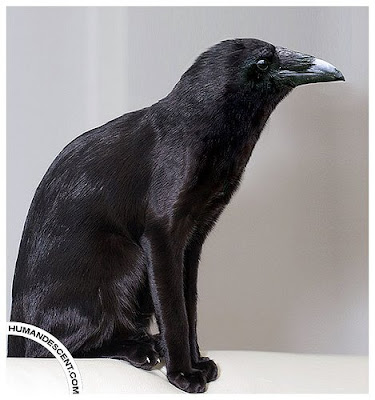 As we were driving back from the beach on Sunday I said something about all of the dead trees. Dutch Elm or Live Oak, something: the rolling hills of West Marin were dotted with the brittle skeletons of dead trees. It's a sign that the end of world is coming, Bryan said, and then I fell asleep, not so much because I am indifferent to the impending death of our planet, more so because there is something about a hot car on a windy road, salt air and the sound of an open window that seriously knocks me the shit out. Anyway, since then I've noticed that he might be right. The dead trees are almost certainly a harbinger of the Apocalypse because every where I turn I see more and more signs.

Because you have to know that this world will not go down quietly. First maybe it will be heard in word captures. Sented Diarrhea? Does this happen to anyone but me? I mean, not the diarrhea part, although woosh! That time I went to India was a story. No, I mean the word capture. What does this mean? The supposed randomness of these words. Surely it means something??? And then there is this: 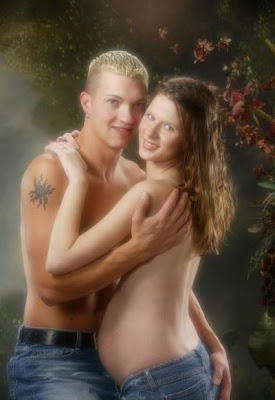 Somebody's high school senior portrait, which really wouldn't alarm me if I hadn't just watched three back to back episodes of 16 and Pregnant. Watch that and then try and tell me the world is not ending. (Sarah Palin--I blame YOU for this one.) 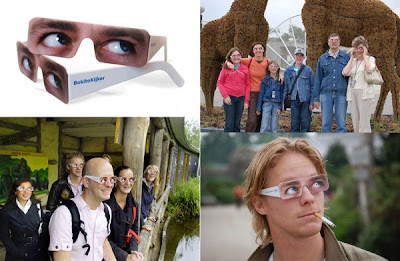 Other signs? These No-Eye Contact glasses, and the fact that I did not think of them first. I thought it was enough that I have a bitchin' Cloak of Invisibility I like to wear when I see someone I used to work with at the supermarket. But no, I think I might also need these glasses. Just to be safe. And because they would look awesome with my Cloak. And then there's this: 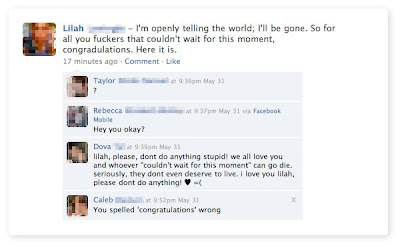 And the fact that I laughed. C'mon, you know you did, too. All of this social networking, web 2.0, 3.5 and onward, the world getting smaller and cozier and still people cannot spell the word "congratulations"??? And while this last one seems as if it would signal imminent global death, a swift death knell to the nuts of The Big Blue Marble... 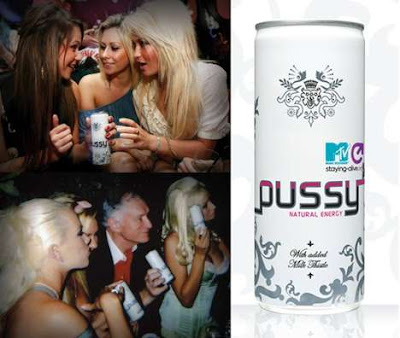 I take small solace in the fact that the marketing department opted not to name it c*nt. Instead they chose Pussy, the softer, gentler shock value. This here is a new energy drink made of white grape juice, Mexican lime, lightly carbonated water and infused with lychee and grenadilla. Hate to say it, but that sounds tasty. I am thirsty here as I type this, trying very very very hard not to make some really base jokes about Pussy. Feel free to go at it in the comments section. Moderations are off--what do I care? The world is ending anyway. Congradulations, my friends, and see you on the other side (of Tuesday).
xoxo,
S

OMG - this post had laughs galore - which is funny given that it is all about the doom of the planet.

16 and pregnant is awesome, isn't it? Where do they find these girls!!!

that facebook status update is ridiculously awesome. and that probably makes me a bad person.

i hate myself for even knowing the term "status update" and typing it out without even blinking.

Susannah I don't know where you come up with this stuff but I always look forward to reading your posts...as for that senior portrait...that is definitely special!

According to that douche bag Nostradamus, they world will in in 2012. That means I've got about 2 1/2 to 3 years to get my shit together...
Also, I did laugh at the Facebook status. But I hopefully the embarrassment of not being able to spell correctly was bad enough and she didn't kill herself. AND... that senior portrait is totally gross. Ew.

That senior photo is quite similar to my own.

Oh and I wasn't pregnant.

While I dislike the writing of "congradulations," that someone would actually comment on her misspelling vice her calling out that she may commit suicide, to me says more about our culture right now than the misspelling itself.

Saw your blog via billwasik.com

Dude. 16 and Pregnant. Can you fucking BELIEVE that shit? It is riveting. Slash horrifying and sad. Slash RIVETING! It's so totally up my alley it's not even FUNNY.

We sold Pussy at the strip club I used to work at. Pussy the drink. Okay, fine. Both kinds. This nugget of wisdom will surprise exactly zero people.

And the 7th sign? This headline that just popped up on my iGoogle homepage: "Jesse Jackson Urges Suicidal Michael Jackson Fans to Live"

I knew where were at the precipice of armageddon when I realized I loved the real housewives series (OC,NYC,NJ - not really Atlanta so much). I knew I had become one of the fallen.
BTW Nostradumas is as prescient as the jehovah's witnesses.

Your blog is hilarious! I love reading your posts. I wanted to let you know that I am giving you the "One Lovely Blog" Award.
If you would like to pass it on, here are the rules:

1. Accept the award, post it on your blog together with the name of the person who has granted the award, and his or her blog link.

2. Pass the award to 15 other blogs that you’ve newly discovered.

Oh my. I hope you don't mind that I am nabbing the senior portrait and using it as my Facebook icon. It's just too good.

It does sound tasty. If you get two cans, I'll meet up with you to imbibe.

Is that REALLY a hight school portrait?? rad.
And Pussy the drink - I'm not even sure how to swallow this, literally.

Once again, WHERE do you FIND these fucking pictures???? They make me laugh even when I'm having a crying day.

And I thank you.

Like drug addicts on meth, I've become hooked on 16 and Pregnant. Train wrecks are so awesome to watch.