This evening my dad made a remark about how I really need to post something because he's sick of seeing that photo of Priscilla Presley's bad plastic surgery. So am I and so I am. 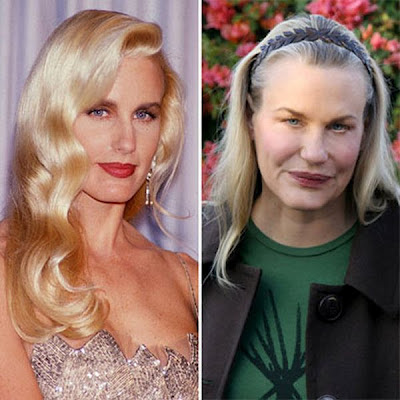 My dad has always had a thing for Daryl Hannah, and we always teased him because she's a total mouth-breather, although she was gorgeous pre-fillers, brow lift, cheek implants and Botox. Is Botox a registered trademark? My bad, I think it is. Botox®

I am struggling to keep up with it all, the litany of to do's in my head sounding suspiciously like the grown ups in Charlie Brown. Oh, I am sure you have it, too. Laundry to do, bills to pay, projects to complete, kids to pick up, groceries to get, the blah of it all trailing off into the low nothing noise of a trombone. Did someone say Friday? 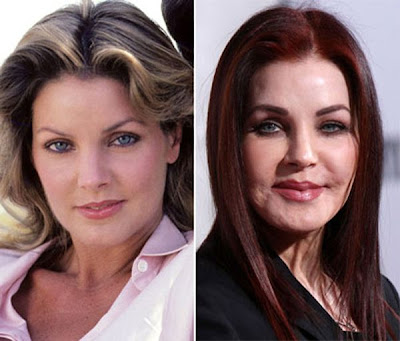 Not quite sure what Priscilla Presley is doing here except to say that I cannot stop staring. (Sometimes dots are better left unconnected, the Round-Headed Kid and the pretty girl who married the King and turned into the Little Red-Haired Woman with the I-Don't-Know-Why-Face.)
That's all,
S

I've had an insanely stressful few weeks. Family stress, money stress, work stress...not to be all coy and poop, but nothing I can write about here except to say that I am tired. And very very happy to have found this video at the end of a particularly bad Monday.

Just promise me you'll wait for the 37 second mark. This is an 11 year old Ryan Gosling performing with his sister at a Mormon talent show. (Did you know he grew up Mormon?? For that matter, did you know he could dance like that and/or rock a 90's wedge haircut and silk shirt combo???)

What I'm Thinking About Right...NOW

For the last few nights I've been fixated on Rody's butthole. Sidenote: do you ever say a sentence and then marvel at the fact that you said it? Like wondered if maybe you are the only person in the history of the spoken word to ever say "hang a left at the statue of Stalin's frozen urine"? Not that I've ever uttered that exactly, though I did just type it. And this right here is why I don't smoke pot. 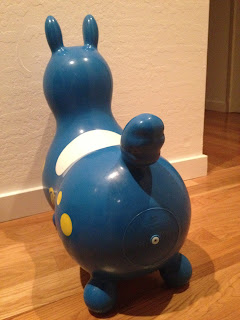 Anyhoo. Every night as I rock Ozzy to sleep I am left to stare at the backside of Rody. Now I love me some Rody. The funny little face and stout body; I want to kiss those flat plastic eyes. I just cannot for the life of me understand why they placed the valve in such a way. Each night I picture the Italian manufacturers of Rody shouting mettiamo qui il buco del culo, haha! I don't know. It makes me laugh, this thought. Again--this is why I don't smoke pot and why I apparently cannot, do not and should not speak Italian. Basta.

And then there's my Diaper Champ. When I am done looking at Rody's bum I stare at the Diaper Champ and think about how it looks exactly like a Stormtrooper. A Stormtrooper with terrible diarrhea, but a brave Imperial Stormtrooper, nonetheless.

Other things I think about as I rock Ozzy to sleep: how we are going to pay for our kids' college tuitions? Should I be unplugging the toaster before I leave the house? Why are there so many dust bunnies under the crib, and have you seen the trailer to my brother's new movie Shadow Lurkers? I mean, I know I posted on it last week, but I am one proud sister so I'm posting it again. Check it out and leave my brother a YouTube message. His name is Andrews and he always says please and thank you to waitresses. Not sure why that sentence just popped out as the one to describe my brother but it's actually pretty indicative of his character. Like I said: I'm proud.

Call it a Day

This week has pretty much kicked me in the face with a steel-toed Havaiana (summer can be a bitch) so I leave you with this: 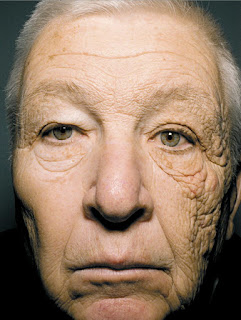 This man is 69 years old. He drove a truck for 28 years, hence the unilateral hyperkeratosis, nodular elastosis and general dermatoheliosis on the left side of his face, i.e. the sun coming through the driver's side window fucked his shit up. Note to Self: wear sunscreen.

See also: Footnote to Self: when taking photos of your baby in the bath with your new iphone, do not accidentally push the button that flips the lens around so that you see yourself caught completely unawares, head tilted down pluralizing your chin, eyes crinkled up like a 69 year old truck driver.

Posted by Petunia Face at 4:00 AM 2 comments

Are You Afraid of the Dark?

Because I am. Afraid. Of the basement, of the space beneath my bed, of shadows and storms, of what might be behind doors and curtains and corners and the very word and. Seriously. Put and in the dark and...?

I, however, am not scared of my brother, even though he did make me lie down in the street when we were little so he could stand above me to spit, saying he would catch it which of course he didn't, just spit on my face and laughed. Who cares if I've told this story a thousand times, so help me, he deserves this story told a thousand times more...but really this is a post about how proud I am of my brother.

Check this out: my brother made this movie with very little budget but a spitload of imagination. Shadow Lurkers preys on the universal childhood fear of the dark with the question: what happens when our shadows turn against us?
Thirty years later and I have almost forgiven my brother for spitting on me, mostly because I remember him letting me sleep on his floor when we were little and I was frozen afraid of the dark. I would creep in to his room and he'd toss me a pillow to curl up next to his bed, and sometimes he let me play his Atari. So check out his movie, and "like" the movie on Facebook. Because he's a fantastic storyteller, writer and director, but also because if there really are fucked up shadow things waiting in the dark (and I'm pretty sure there are), then I know my brother would still let me sleep on the floor next to his bed.

Posted by Petunia Face at 4:00 AM 2 comments