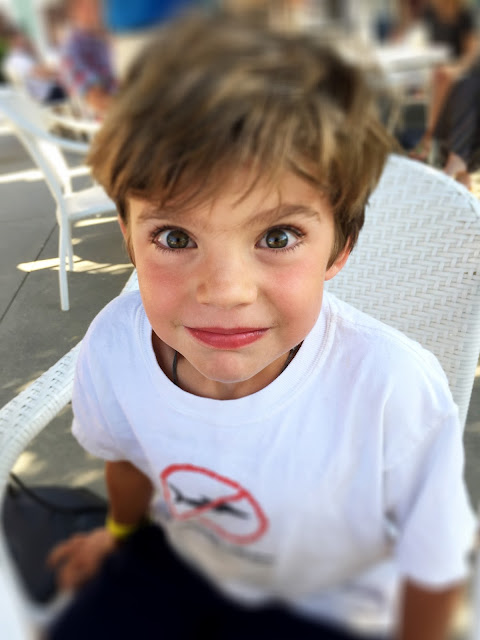 You sound like you hate me, you say in what is either the saddest thing a boy in trouble has ever said to his mother, or the most genius manipulative thing a boy in trouble has said to his mother. No matter. Either way I tell you I will always love you, even when I am mad at you, even when I yell at you. I love you. I hope that you hear it, because I will keep saying it, just as certain as you will keep not listening. This is who you are, my Ozzy boy. Had I named you Robert maybe you would have listened, an Eli would have been quiet, but I didn't. I named you Ozzy and you do not listen. You do not toe the line. You whine. Yell. You laugh too loudly, say hello to everyone who passes by, you color with crayons as animated and hard as road rage, you fall to the floor just because you think it's funny, even when there is no one around to think such things. You fall simply because it is. Funny. You are my Ozzy, and I love you, my wild-eyed boy who kisses me each night with carbonated lips mid-story, your face smelling of swimming pools and coins.

Want to Come Over for Dinner? (Kitchen Remodel Reveal!)

Unfortunately for you (and my family), I suck at cooking. BUT THAT DOESN'T MATTER ANYMORE BECAUSE WE FINALLY REMODELED OUR KITCHEN!

Let me back up to 1979 when our kitchen was last updated. Then fast forward to a few years ago when I entered a contest I saw on the Ellen show--she was partnering with Houzz to remodel someone's ugly kitchen for free. I had an ugly kitchen, so I took a bunch of pics and submitted them. Before you get all excited for me, this is not a post about how I was on the Ellen show and got a free remodel, because me and my ugly kitchen were not chosen. Apparently my kitchen is not Award-Winning Ugly, which makes it even uglier so it should have won on technicality. 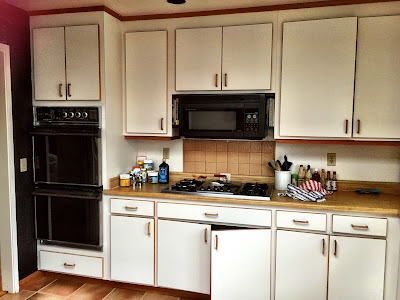 I just mention the Ellen show because I found my pics from when I entered that contest. And no, I did not artistically stage the pic with that cupboard open; it simply wouldn't close. Ever. Closed cupboards are for Ugly Kitchen Posers. 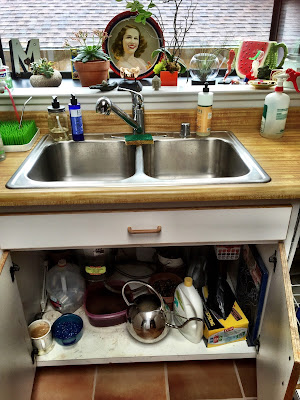 I believe this photo was to illustrate the mold growing beneath the sink. Whenever you ran the garbage disposal, you had to open the these doors because sometimes, inexplicably, just as a fun surprise, the pipes would burst spewing water and food bits. 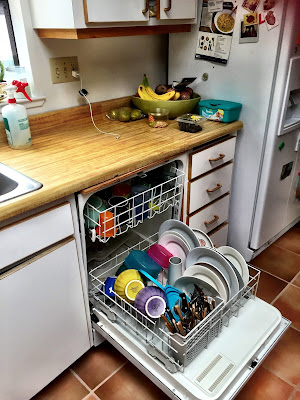 Perhaps I ought to have entered the contest with a video as so many of the uglies were ugly in action, such as the dishwasher, which popped out of the counter with a loud ka-thunk every time you opened it. 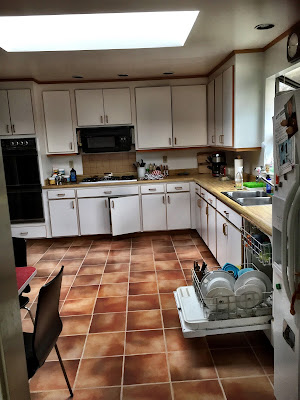 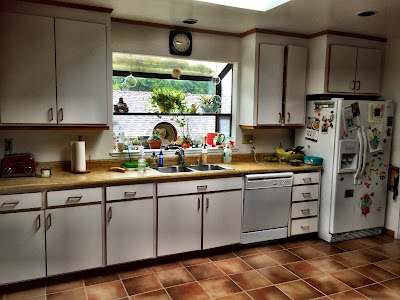 It took a few years of me giving the stink eye whenever I'd open a cupboard and the entire panel would come off in my hand, but eventually Bryan agreed that Ellen or no Ellen, we needed to remodel the kitchen.

As an aside, it makes me laugh a dark, sinister laugh whenever people say to me, oh, how lucky your husband is an architect! He can just remodel your house whenever you want! To which I pull out the ol' cobblers children go shoe-less line.

I will say that having an architect husband is lucky in that he has connections, said sans dark sinister undertones. Bryan got us deals on deals, and for that I owe him a back massage (safe to say that here as he doesn't read my blog). 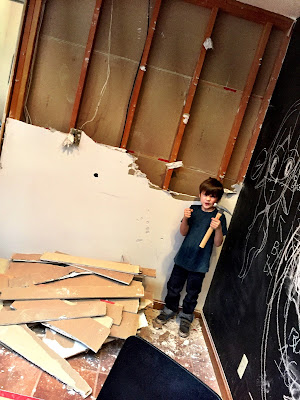 Try explaining to a 5 year old boy why sometimes it's ok to swing a hammer into a wall, but not other times.

You ready for an After? 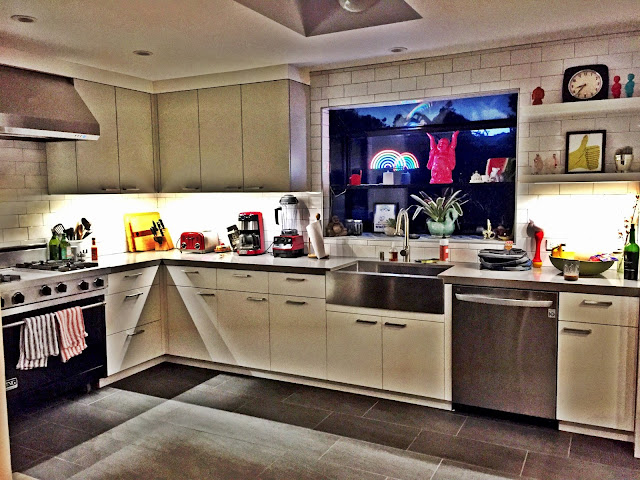 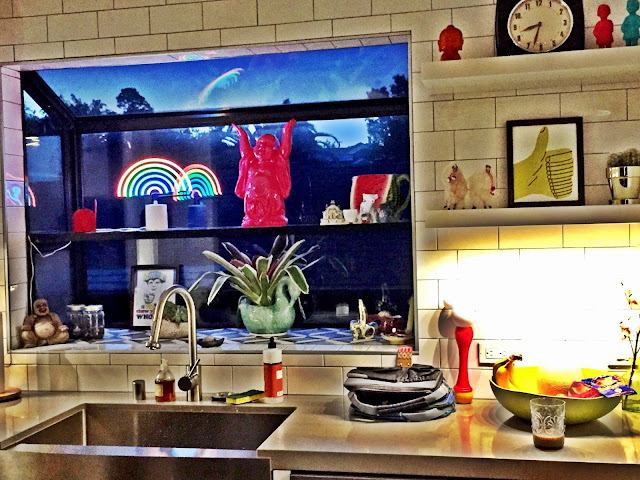 I am a sucker for a pop out window (which we did not replace, and which Bryan regrets, but whatevs, I needed a spot for my neon rainbow, duh.) 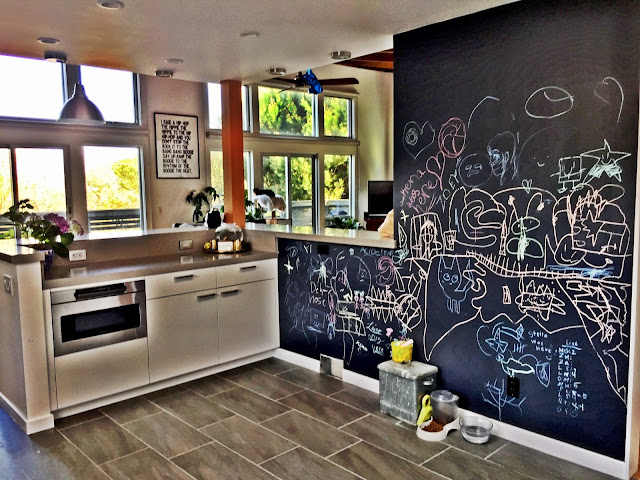 This is the wall we took out, and it makes ALL THE DIFFERENCE IN THE WORLD. (Note: we did keep some chalkboard wall, which should be a staple in all households, in my opinion.) 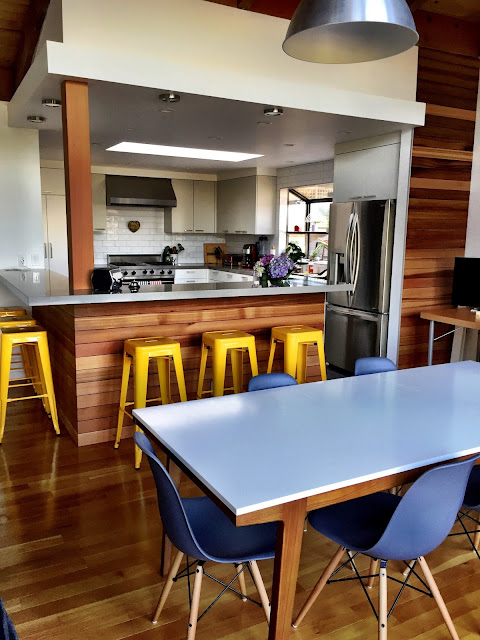 The view into the kitchen now. And yes, we totally play "restaurant" and yes, I did get a bell that I ding and I do yell "order up!" to call the kids to dinner. 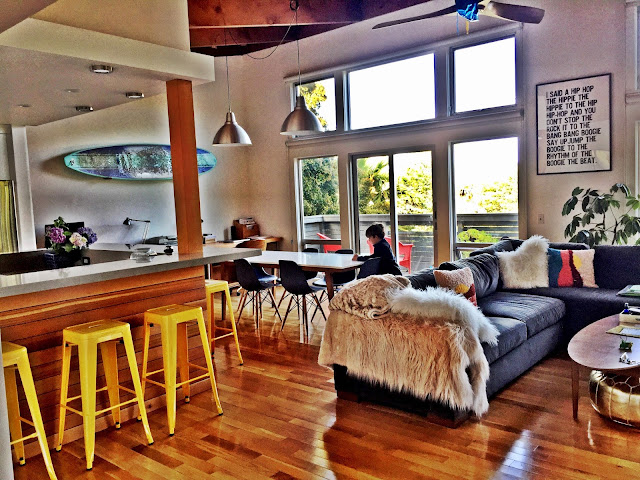 Also yes? I got a print of Rapper's Delight by the Sugar Hill Gang. Once you get it down, nothing makes you feel more bad ass bouncy cool than rapping it a cappella.

Everything about this makes me happy.

So take that Ellen and Houzz, that's that, a wrap on our kitchen remodel. I still suck at cooking, but who cares when I have a fresh kitchen with a neon rainbow and can rap a hip hop, the hippie to the hippie, to the hip, hip-hop, and you don't stop, the rock it to the bang bang boogie, say up jump the boogie, to the rhythm of the boogie the beat.

Posted by Petunia Face at 7:23 AM 7 comments

Other Than That, How Was the Play, Mrs. Lincoln?

I could tell you about what it was like seeing a large photo of Andy on an easel at the church, how it was so iconic of a funeral that I immediately began to choke-sob ugly cry, but I won’t. I could tell you about my eulogy, or my dad’s eulogy even, how my dad told a story about Ozzy asking him with all the shameless curiosity of a 5 year old why he was still alive. My dad said it was supposed to be him who died next, the order of death unnatural with a son dying before his father, how even Ozzy knew that, but I won’t tell that story either.

Instead I will tell you that we went to Disneyland the next day. I mean, in a world where nothing makes sense, why not go to The Happiest Place on Earth?
I hate Disneyland. Which is to say I hate crowds and lines, other people’s kids, other people period (kind of, super fine print a mile long on that one). Lucky for me, Disneyland was thick with people who looked as emo as I felt inside. Seriously, as far as the eye could see were people dressed in black, goth women carrying dark lace parasols, their boobs spilling out of black leather corsets, men in steampunk suits clanging with buckles and chains, white makeup spackled on faces. It was...weird to say the least, but also right? Already we felt surreal going to Disneyland the day after my brother’s funeral. Everything felt disjointed and wrong, so finding ourselves surrounded by the dark subculture at The Happiest Place on Earth seemed to make as much sense as my brother not being there with us.

There was just too much black lipstick for it to be a fluke, so I finally stopped a goth man and asked what was going on. Apparently, it was Bat Day in the Fun Park at Disneyland, which he emphatically told me is NOT a themed dress up day, but an annual “meet up” that attracts people in the goth community from all over the U.S. What this meant for us is that the line for the Haunted Mansion was 70 minutes long, while the line for It’s A Small World only took 20 minutes.

What this also meant for us is that we laughed. Not at the Bat People, per se, but at everything. What else were we going to do waiting for over an hour in line for the Haunted Mansion, snaking between fake tombstones, squished between people dressed in the Victorian cult of mourning? Laugh. That’s all we could do, all we can ever do, and so we laughed. Together.

How was the memorial? Thanks for asking. It was gut-wrenching agony, another step forward in me accepting that my brother is really gone. (Why is there no analogue word of "orphan" for someone who has lost their only sibling?) But it was also healing. Being with my cousins and aunts, my sister-in-law, my nephews, old friends I haven't seen since I was 10. Despite so much tragedy, I am lucky. So freaking lucky, and so, so loved.

Posted by Petunia Face at 7:00 AM 3 comments