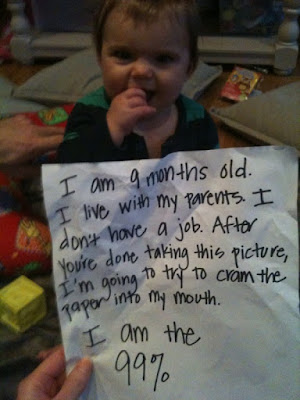 Or 99th percentile, whatevs. But yeah. Yesterday Ozzy had his 9 month check up and he is now officially a big boy at 25 lbs, 7 oz, which in mommy circles translates to bigger than 99% of babies his age. Here are some of his nicknames: Bubs. Marlon Brando. Bam Bam. Silly Boy. El Guapo. He likes sweet potato puffs, bananas, his sister and pushing his fingers into my mouth to methodically inspect my teeth. I very much like those things, too.

And now he is going to eat the paper. 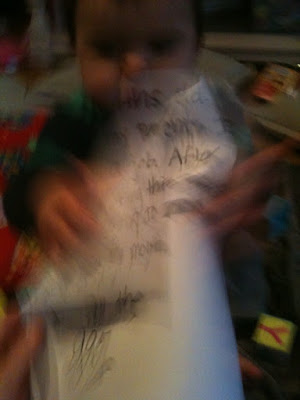 See Also: In This Way, Childbirth is Like KFC

Today was like Kentucky Fried Chicken. Or glitter nail polish. You know, it seems like a good idea before you actually do it, cause damn those biscuits are good. The way that glitter nail polish looks so disco, as if your fingers were out all night somewhere so cool the rest of you couldn't get past the doorman. And then it begins to chip, or maybe you're two biscuits in and boooof, the butter and the honey, something doesn't feel so good, maybe some cole slaw will right things, but no, oh god no, and regular old nail polish never removes the glitter, you know that now, right? Instead you have to pick at it with your fingers for days, and you vow to never again eat Kentucky Fried Chicken, and you don't. At least not for a few years anyway, until one day you forget, and you smell the biscuits from across the street and think god, when was the last time?...

All that to say that today I did not eat KFC or paint my nails, but worse. I went to Chinatown with my mom, Zoey and Ozzy. It had been 3 years since my last visit, and really I only went again because Zoey could no longer squeeze into her silk pajamas. So we loaded ourselves into the car and drove and parked and walked and smelled and smiled tightly, the people, there were so many people, me with the stroller and my mom beginning to feel dizzy. I need to sit down, she said, I need to feed Ozzy, I said, and we pushed and shuffled, my hand tightly holding Zoey's, ducks hanging from bent necks in store windows piled high with dried lotus root and salted turnips, pushed through the people pushing past us, a man blowing his nose into the gutter as I very nearly pushed Ozzy's stroller into the stream of snot. Let's never do this again, I said to my mom later when we finally got back to the car. Agreed, she said. Three years from now, if one of us says hey, let's take the kids to Chinatown, the other one has to remember what a terrible idea it is and say no. And we promised we would, except we won't because biscuits always smell heavenly from across the street, and then there's this: 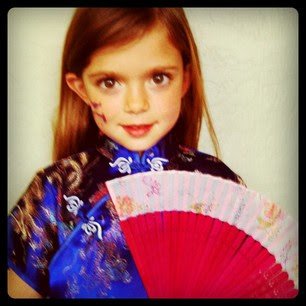 And even though Ozzy didn't get any pajamas of his own (mostly because the kerosene smell of the fabric scares me just a little), here is a photo of him from last weekend, just because. 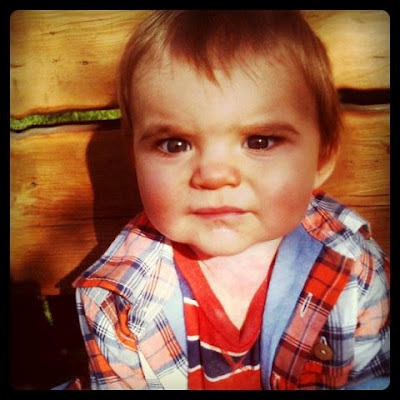 Also just because?...When was the last time you had KFC?

There are things you don’t write about on blogs. Like about how much I love cereal, for instance. I mean god, I fucking love cereal, but that would be boring, writing about cereal. No, you don’t write about cereal or sadness, or about how I can understand those mothers who shake their babies. Not that I would ever shake a baby let alone my baby, but there are those moments when he is crying and crying and crying and my hands grow stiff with fuck! The difference between me and those mothers who shake their babies only in the fact that I don’t.

So what you write about on blogs are cherry blossoms and Cadbury Cream Eggs, the curve of his cheek a mathematical equation plotted on a graph that equals everything, plus the napkin I drew for her lunchbox today. 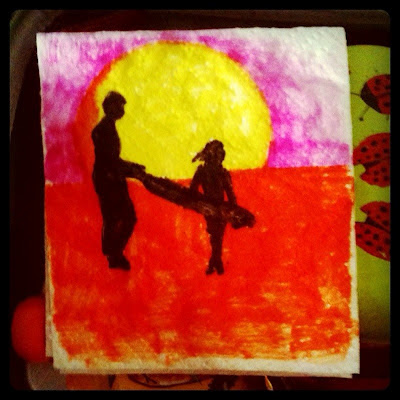 Posted by Petunia Face at 5:50 AM 5 comments

I was going to post this on Valentine's Day, but then Bryan made turkey tacos and we watched a bad movie, and, well. Happy belated. This is Zoey's favorite book right now. Mine, too. It's from my office post-holiday party--they had this photo booth thing that wasn't a photo booth at all but took rapid-fire pics and made flip books out of them. I have always adored a good flip book...

I actually went so far as to email the flip book company afterward to find out how much it costs. I was thinking maybe for Zoey's birthday party if it didn't cost a zillion dollars, or even over a hundred? But they never emailed or called me back so I'm thinking if you haven't heard, you've heard, i.e. out of my price range and I'm making my own cupcakes anyway because somehow we owe big time taxes this year.

p.s. Contrary to photographic evidence, Bryan does not sport pimp hats at workplace functions. There were props at the flip book station, of which I opted out.

An Early Valentine to My Family

Roses are red, violets are blue, I can't believe how much I fucking love you. 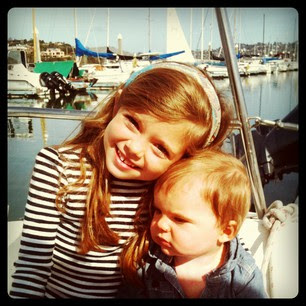 Yesterday we hung out on the sailboat while Bryan worked on it, something involving ropes and water. Or water and cleats? Whatever. My husband is so freaky style-y sexalicious the minute he gets around the ocean I find it hard to concentrate. Like a great big salt lick. Oh, yeah, I went there. And then there's the little chunkalunka he's holding here on the dock. Be still my ovaries... 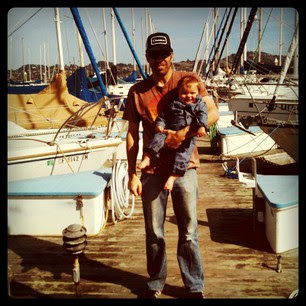 Bryan loves this photo because it looks as if Ozzy's trimming a sail. In reality he was trying to stuff the thick, moldy rope into his mouth, but one day--one day soon--we will have him out sailing. 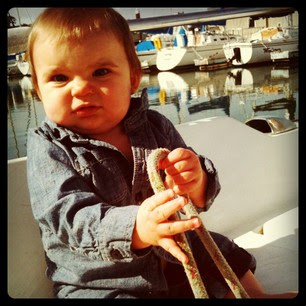 Zoey's french fisherman outfit was totally coincidental, bee-tee-dubs. Does she not remind you of a 5 year old Jane Birkin?? Mon freaking dieu, she is my everything. 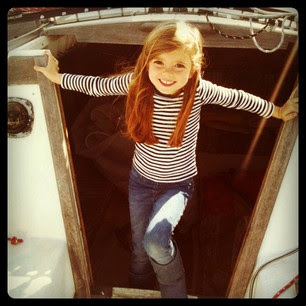 You know how there are words in other languages that don't exist in English? Like "jayus," an Indonesian word that translates to a joke so poorly told and so incredibly unfunny that you cannot help but laugh. Well, I'm thinking there has got to be a word for loving something so much that you want to inhale it in, eat it up, fill your chest and belly whole. That. Certainly there has to be a word for that? Because this photo? I want to fucking eat it, you guys. The toes, the teeth, suck on the gristle of the knobby elbow even. 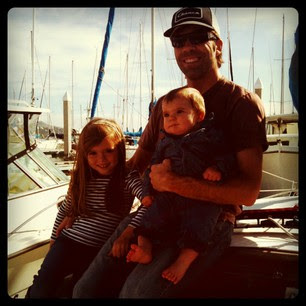 But I have done my research online and I cannot find such a word, so as with much of life I will have to make it up. Gompumm. How about that? Let's do it with an umlaut, then. Gompümm. 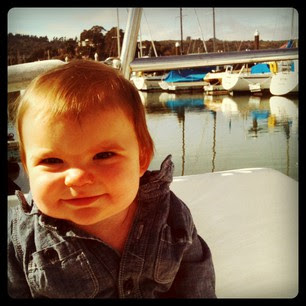 Done. Look it up. Gompümm [gahmpum] verb, transitive and otherwise. This: 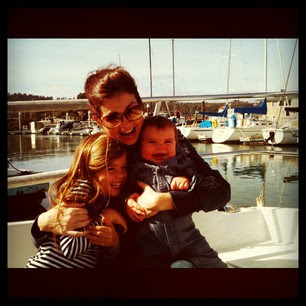 I come home and tell my family I can smell it, spring, pink cherry blossoms and light, in the distance of three months the hot smell of plum trees and nights that start well after bedtime.

It’s because I farted, Bryan says.

But it’s not and I shake my head annoyed. I feel safest in the summertime, and already I am biting blueberries in two and pushing the crushed halves into Ozzy’s open mouth. It has hardly rained all winter, though a few nights ago it did just a little. In the morning Zoey woke up and said she heard gumdrops falling on the roof while she slept, and when I laughed and told her it was actually rain, she looked at me as if I were the crazy one.

And maybe I am. For remembering the temperature of smell. For waiting on the ionic taste of pavement at night and how I want to wrap it around me like a towel. 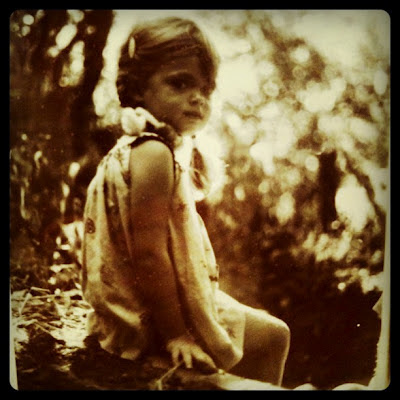 1970something, sitting on the cement edge of a drained pond at a neighbor's house sometime in August. We threw dirt clods down the hill and the yarn in my hair was bright yellow. If I think hard enough I can still hear the slack tymbal sound of the cicadas.

At Least It's Not Kim Richards

Some weeks can only be summed up by the rubbery hot dog muse that is the mouth of Taylor Armstrong. Because Monday was so totally this: 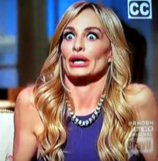 Followed quickly by the bitch-just-you-try-and-flatten-me-down that is this clammy low (dude, it was bad)... 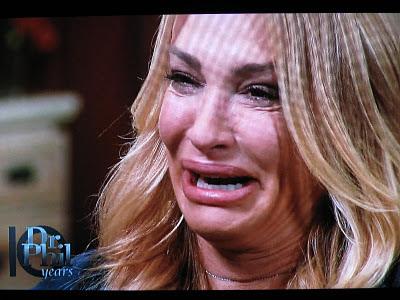 And as is my wont (who even says that anymore?), my mood rapidly switched... 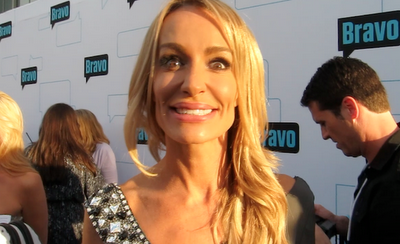 A slippery slope slide into the abyss of absurdity. (If you look deep enough, I think you may spot Camus.) I.e. shit got funny, fast. 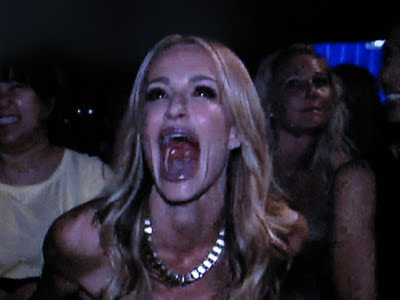 The rest of the week I just sort of hung on by the mehness of it all... 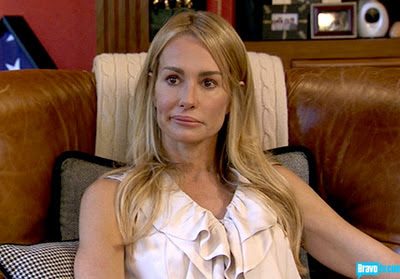 At some point I may or may not have done this, though really that's none of your beeswax. 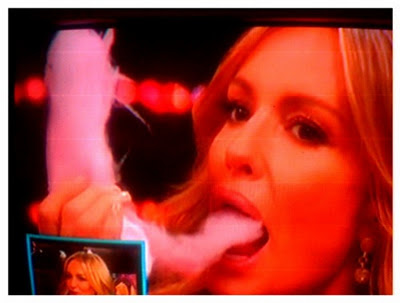 And now it is pretty much Friday and I am plum tuckered, my emotions frayed, skin dry, mouth tired of moving. 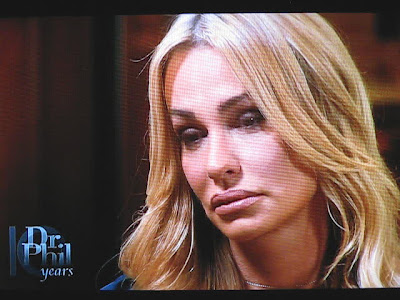 As the divine Taylor says each week, I have finally found my voice and I'm not afraid to use it. Which, yeah, awesome for the both of us Taylor, the thing is, don't know about you, but I haven't got much more to say.