Where I've Been And What I've Been Eating, + A Tour Of My House (A Fascinating Exposé On The Last Few Weeks)

Remember when I told you I was going to rehab? 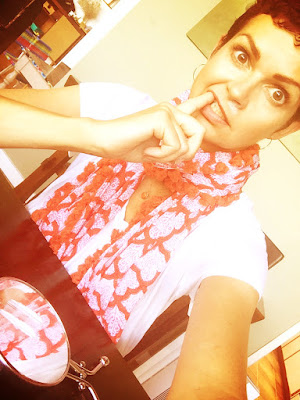 Only the rehab was for sugar, and I began seeing a nutritionist who not only said no sugar but also no dairy, no gluten, no grains, no soy, no vinegar, no corn and strangely no pineapple or fluoride either? Yeah, that. Well here I am freebasing something called L-glutamine to curb the cravings of my molto dolce vita past. Life is such that I perv out on 86% cacao now, but only sparingly, choke it down chalky with a handful of raw almonds and water, but not tap water because tap water has fluoride in it and I am intolerant to fluoride. Sans fluoride and brushing with hippie paste, maybe soon I will have nasty crack teeth to match my coke whore habit of rubbing L-glutamine on my gums.* *footnote: I have never actually done coke. Just not my jam. Not that I judge you if you do. Except if you're this guy in which case I totally judge you, though you do seem rather polite.

In hindsight, this was not the ideal time to re-do my whole way of eating, what with me going back to work. It was also probably not the best time to do a major remodel on our house, but that sort of happened by accident. See, when we went to the beach for a week before I went back to work we had intended to get new windows put in our house. Super clean, in/out, the windows were supposed to be installed by the time we got back. The old ones were single pane aluminum and you could feel the wind blow through them, that sort of boring blah adult decision thing that makes your throat close up as if swallowing a very large vitamin. But when the contractor opened the wall to put in the windows he found buckling beams which led to the discovery of rotten siding and a deck that was thisclose to collapse. And suddenly our quickie window job became a chaotic ka-ching of you're-fucked-if-you-don't-do-it-and-screwed-if-you-do, also known as re-siding the whole house, painting it, new windows and shoring up beams and a little deck rebuild.

I should also mention that before we went to the beach for a week we had ordered a port-a-potty for the workers. My husband told them that because I am immuno-compromised we can't have everyone using our bathroom. Which was something of a white lie. Anyhoo, the day that we drove back I had to pee super bad. When we finally pulled into our driveway, Bryan parked the car and I raced into the kids' bathroom doing an impressive pee-pee dance, and gah! The toilet was inexplicably taped shut with blue painter's tape. I thought maybe that was just a construction thing, so I did some kegels and leaned down to quickly unpeel the tape from beneath and opened the lid to find a massive shit in the toilet. Like the size of a dinner plate. And a few days old at least. Someone not only took a huge shit in the toilet and didn't flush it, but also taped the lid down. And because I was kneeling down to untape the toilet, my face was inches away when I saw it. Touché dear construction workers who apparently did not like the Honey Bucket we ordered for them.

So that's where I have been. Coming face to face with shit, living in a construction site of dust and plaster, eating fistfuls of legumes, eggs and probiotics. Every morning before work we had to re-tarp our entire house, and every night when we came home we had to untarp our beds to sleep. Quite the re-entry into working full-time again. I was white-knuckling the Before-ness of it all. 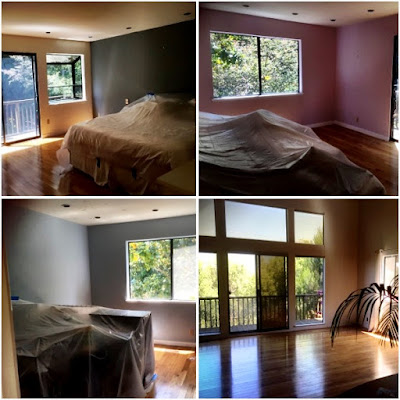 Which is why I haven't been here. Because my laptop was under a tarp, but also because of chaos and dust and strange men walking into my house starting at 6:45am.

I still don't know which one of them is responsible for the big shit, but we are very nearly almost done, so I am willing to forgive. Here is our living room today: 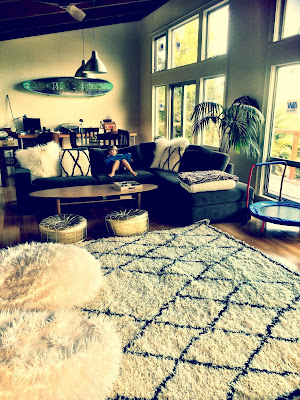 Note the new windows--we have to keep the labels on them until our inspection is done. The window wall was the one buckling. 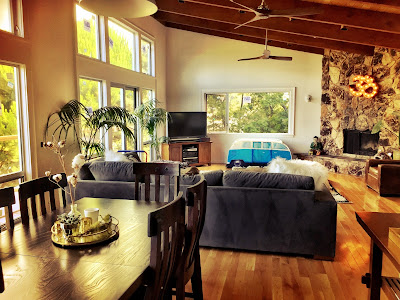 Bear in mind: I am not a decor blogger. While I would very much like to get rid of my porn-backdrop stone facade of a fireplace, it's not happening because $$$, so I have decided to embrace the brown chicken brown cow vibe. 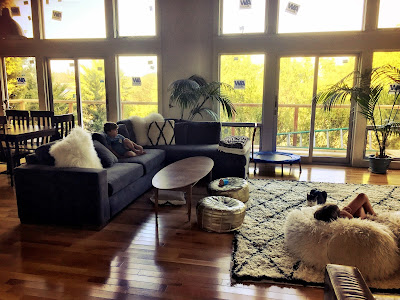 In addition to being paper thin, the previous windows also had bad bubbling tinted shit all over them, as if we were looking out into the world through the windshield of a used Gremlin. So that's gone. Though you might notice the crumbling deck is not yet done. 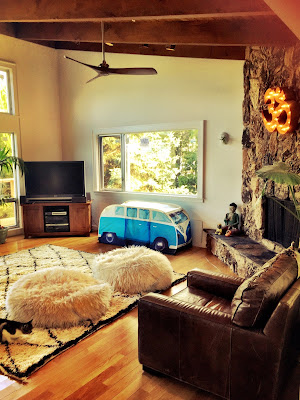 Speaking of which, here is Ozzy's room with new windows. 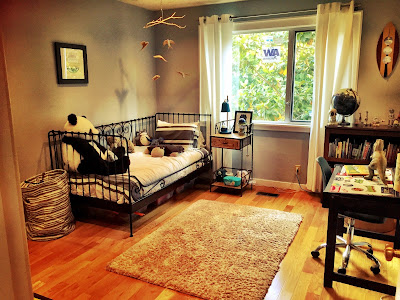 And Zoey's room. Her old sliding glass door had been installed backwards, so the lock was all wrong. Now it's all right, alright (alright), and she took the opportunity to paint her room blue. (*sob* the days of little girl pink are over.) 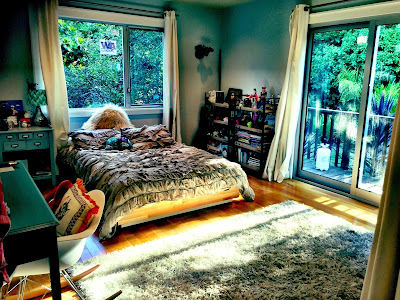 And finally our room. Where the proverbial magic happens. Our old window didn't open and was cracked. I chose not to take that as a symbol of anything. 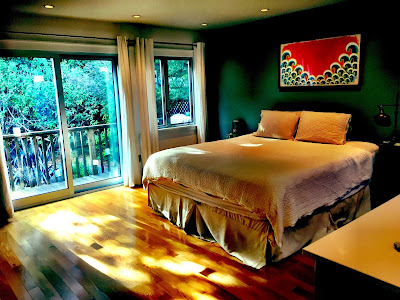 So that's where I've been. What I've been eating. 20 grams of protein per meal and 7 servings of vegetables a day. Did you know there is soy in pretty much everything?! It's hard as fuck, but easier now that I have my table untarped to sit at.

Missed you all.
xo,
S

Your fucking HOUSE!!! Aside from the almost devastating crumble of things, I want to crawl inside and live there. Inside Spicoli's van, to be exact.

Hey, Amy B here. So you might be interested to know, that polite guy is using a part of his wrist called the "anatomical snuffbox" to snort his coke. I know this not from snorting coke but from breaking the bone underneath. My doctor at the time told me I broke my anatomical snuff box (he thought that was funny and I stared at him blankly until he clarified the meaning) and, sure enough, if you search wikipedia it will show you. Just splay your fingers and point your thumb up a bit and you can put some goodness in the little well that forms there and sniff it out. In your case, 86% cacao, then you don't need the almond chaser.

Also, is that a lit up Prince thingy on your fireplace? Because that is all kinds of rad.

Thanks Krista! It's hard to put pics of your house up because surely there are people who hate your taste, so thanks for the kudos. Spicoli van 4 lyf.

And Amy, thanks for the coke tip. ;) The marquee light is actually an Om symbol, although The Artist Formerly Known As would be cool, too.

I like your house too! Great window front looking out into the green and I have the same carpet (living room)- so I might add, your taste is impeccable :-)) Plus if you look at Emily Henderson's house (she has a blog too) they have the same fireplace and since your living room is quite large with high ceilings, it kind of fits there nicely.

Looking at the first picture - that short hair takes at least 10 years off, you look like a 25 year old student (especially with that gesture).


Wow, that is one sweet house! I love it!

Funny that you're having to avoid those particular items, but they allow legumes. That's almost always on the no-no list. Then again, WTF are we supposed to eat, right?

I haven't used fluoridated toothpaste or water for 10+ years. I think you'll be fine. It's also been that long that I've avoided aluminum-containing deodorants. And, yes, I smell fine. (Certainly not like the stale shit that was marinating in your loo! For fuck's sake!) For some reason, after a few months of "detoxing" my 'pits, I've had no odor since.

Look, I know I sound like a broken record, but the short hair looks great on you. Like, really great. That first photo is gorgeous. That is, YOU are gorgeous!

I've been very interested in the "Tiny House" movement that's become very popular in the last several years. Locally, we have a tiny house builder that creates some amazing homes. I'm just wondering if they can scale-down your chic pad to about 250 sq. ft.

Lots of Xs and Os to you and yours.

Nice pad. I am extremely skeptical of your diet, however. Unless it is making you feel like a superwoman, of course. Then I'm a believer.

P.S. I say this as someone who downs handfuls of amino acids, vitamins, and fish oil 3 times a day in an attempt to feel sane. Fuck knows what works.

Anon above, nOt quite sure what you mean by "mental help is still available" but I have a feeling I would disregard it whatever it was.

Mr. X, thank you as always.
Up mama's wall, luckily, hopefully, my diet won't be this strict forever. Right now it's about healing my gut, eliminating foods that cause me inflammation, then in a few months slowly introducing some back. Though I fear my Nutella days are over...
MFAMB, and other anon, thank you for pointing me to more design inspiration! I think it's wise to embrace the stone fireplace. Wise and wonderful.

Ai-yi-yi Susanah. So much on your plate! Sounds like a huge food leap for you-congrats for being brave. Again. I've got a feeling these eating changes will make a huge difference in your health. And your family's, in the long run. Thanks for sharing all the shit, sand and smiles

Loved the shit story. So awesome (for me to read about, not for you to experience). And have you seen Emily Henderson's house? She is a designer and she kept the fireplace like that, in her own home.