My Grandma Do. She is 18, standing on the deck of the ocean liner Rex. She and her mother are going to see the Olympic games in Berlin. It is 1936, and I have no idea what she is thinking. 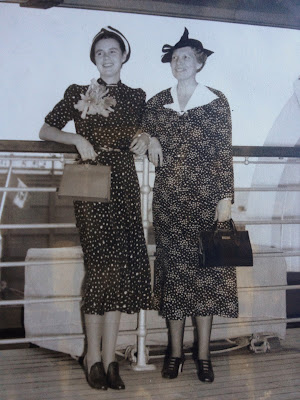 If you read about the 1936 Olympics there is much about Hitler, how he used the games to show the world a resurgent Nazi Germany, promoting his propaganda about "Aryan racial superiority." These are also the games where Jesse Owens achieved international fame by winning 4 gold medals, the most successful athlete at the Olympics that year.

5 years later my grandmother would be married with one son, and the night before my grandfather shipped out to fight the Nazis, my father was conceived. (My dad has always thought of Pearl Harbor Day as another kind of birthday.) Years later my grandfather returned from the war and my dad finally met him, though there is a quiet family belief that he returned irretrievably broken, mean.

My grandmother died when I was 12, though my memories of her are larger than life. She is my Auntie Mame, my own Ruth Gordon; it's easy to deify someone when you can still be bought with rainbow colored sprinkles. So I stare at this photo never knowing her as an adult. What was she thinking?

I put the pieces together like this. Also competing in those Olympic games was another African American athlete named Archie Williams. He won the gold for the 400 meter race, and 52 years later taught at my high school. How thin that is, I think, the wire...a photo of my 18 year old grandmother on her way to Berlin where she sees Hitler and watches a man win a gold medal, a man who later teaches her granddaughter math (or tried to) even though she is not yet married, does not yet have her sons or thinks of grandchildren, does not yet know that war is years away from tearing everything apart, or from putting everything together, depending on how you think of Pearl Harbor Day. Would I exist if not for a day that would live in infamy?

Sometimes my dad comments on my outfit, says I look trig, which is something his grandmother used to say. It means stylish, jauntily trim, and so I look at this photo and think my, how they look trig, greedily searching the photo for the story I know lies beneath.

It's been a while since I've commented here but today I felt compelled to tell you that your writing still takes my breath away.

Thank you lovelyjoy. I needed that :)

I loved reading this post. I enjoy your writing so much, and especially soaked up every word of this one. Please keep it up!

I love reading your post too. You are very talented. :)