I was totally dorking out on Don Draper today, thinking about how this season is supposed to be 1966, how he just turned 40. Which means that if Don Draper were still alive today he would be 86, that is if he didn't die of emphysema first and wasn't a fictional character on the teevee. 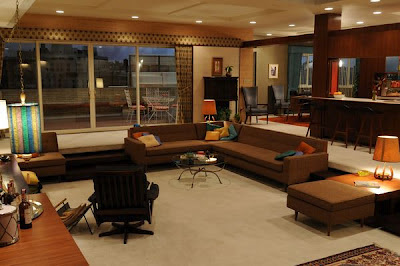 Anyway, I saw this article titled The Story Behind Don Draper's New Digs, and even though I despise the term "new digs" I quickly got past it when I saw the pics. 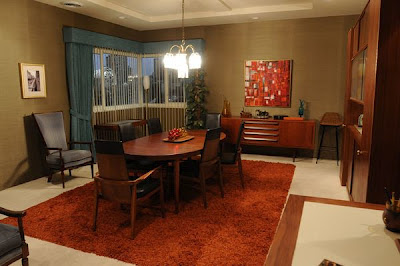 Maybe it's because my house was built in 1979, has a butterfly roof and the stone facade around the fireplace reaches the ceiling, but I am "digging" this look. I guess I'm a little grateful that my seriously outdated house might kinda' sorta (but not really) be thought of as cool. Question mark? Yeah, not so much, but I did have that fridge in avocado green and burnt orange shag carpeting when I was little. 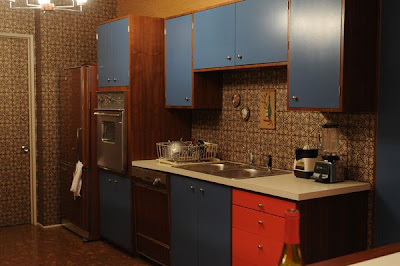 So that's that then. Dollars to donuts Don Draper lives in a retirement community in Palm Springs now.
xo,
S

Yes, yes he does. I saw him while I was on vacation there last week. he wears his hair the same (although completely gray now -- still dapper). He now wears very large glasses with thick lenses, and wears a cardigan sweater even in the heat. gave up golfing 4 years ago and now tries to avoid the sun.
...
Either that, or he's living in one of the fabulous mid-century moderns, has drinks at the club every afternoon, drives a vintage Jag (tho he should have given up his license years ago --- he's a bit of a danger on the road. And he's having the time of his life.

I'm totally loving Don's new home. It reminds me a little bit of a hotel. IF Don were to live this long, he'd definitely be in a retirement home. Though, I doubt he'd have made it this long with getting lung cancer from that chain smoking. Or liver disease from all those mid-afternoon Scotches...