Remind Me Of This Come August 30th

Zoey has discovered my old photo albums. Alternative first sentence of this post: I have slowly been watching my friends turn 40. Which came first, the memory or the fear? Chicken or egg, I turn 40 in 5 months, a fact that has turned me into a liar as I tell everyone I am going to face it without shame. 40, you guys. At least with 30 there was thirtysomething, hanging on to a thread of hip with Hope and Michael Steadman. Remember them? But 40. 40 is clunky, orthopedic, the something now just the story of what has happened. 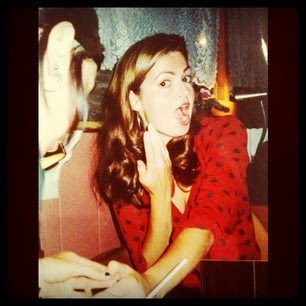 What happened in this picture? Zoey asks, and so I tell her. This was my birthday. A place called Beauty Bar. 27 or 28, I think, though I don't tell her that one of the guys with us that night died years later in a car accident, or that another of the guys later became addicted to heroin. We ate Moroccan food and belly-danced. It was a great night. I tell her, and it was. 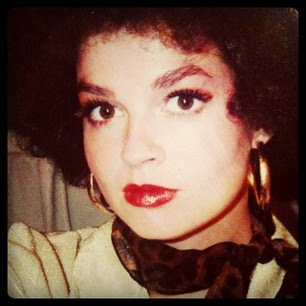 Did you used to have curly hair? she asks me, and I say no, this was Halloween, I think. I hope, the eyebrows as questionable as the wig. This was a Halloween spent with the only couple we knew at the time who were actually married. We were 24, and the couple later divorced, the guy married the girl with whom he had been having an affair, though whom seems too proper in that sentence. They later split up, too, another story of what has happened since. 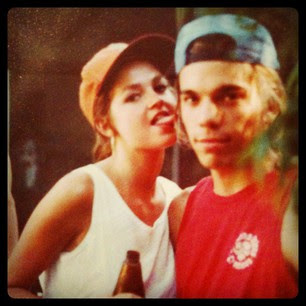 And then this. Kinda hard to explain to Zoey what is happening here. We were 18, our first summer back home after college. A get together with high school friends, probably one of the last times we all hung out seeing as how it had all already started to turn strained, the car accident of my two best friends lurking in the shadows. Fault and blame, guilt, all of us too young to know how to deal with anything but tongues and tight shoulders, the sour taste of beer. I look at this photo and wonder what I am thinking, me with my Stussy hat. God, I loved that stupid hat. 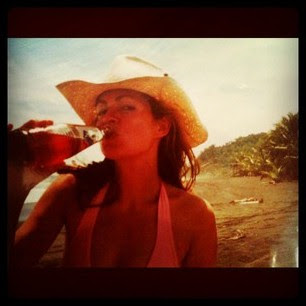 Another hat. This time in Costa Rica. I remember the heat of the black sand, how sweet the Fanta tasted, how fat I felt as I sat there which kills me. I was 27. Bryan and I were playing gin rummy. My bikini was pink and red, reversible, and later I accidentally left it at this little place we stayed at with tons of hot Brazilian surfers. I loved that bathing suit, but I felt fat and scared, had panic attacks walking down the street of a small Costa Rican town. I called my mom from a payphone in Playa Hermosa and I wish more than anything I could tell this girl to relax, she's fine. You're fine. I'm fine. 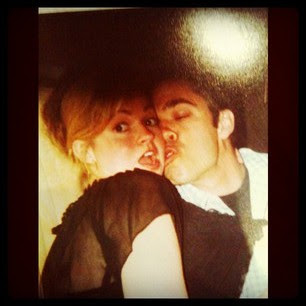 Oh, how we had fun. And if the photo albums are to be trusted, all we ever did was smiled. Laughed. Drank. Ate tapas and smooshed our faces together for pictures. I have made a point of not posting photos of any of my friends (you're welcome, friends), but god, we were all so freaking pretty. Close-ups with no wrinkles, no pores, smooth skin, shiny hair. Blonde, even. Mommy, why do you have blonde hair? And really I have no answer. Because I could, I guess. I shouldn't have--lord knows there was a year or two of blonde I wish I could take back, but there it is. Because I could. 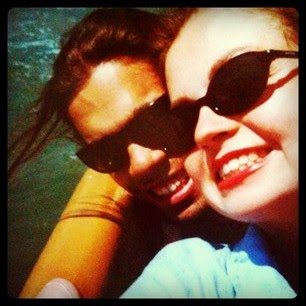 We all could. 18 and 26, 27, 30. Photos of Italy, Greece, Mexico, night after night after night out in the city getting drunk. I am glad we did it, all of it, the stupid hair and mistakes. Not knowing much but most of all not knowing what we had, probably the reason we look so free. Which is why I guess I am reaffirming my lie about turning 40 without shame.* Because this is all I have now, and someday I am sure I will look back at photos of me with my 5 year old girl and 10 month old boy and marvel at how young I was. Am. Now.

*Fine print: I do not turn 40 for 5 months. No shame, but also no sense in speeding this up.

What an awesome post. Makes me so nostalgic...has me wanting to go and look at my old photos. You are such a fab writer Susannah (but you should already know that).

i feel like i want to say so much but i don't have anything to say. maybe it's just because i'm with you, hurtling toward 40 and hoping i can sit back and enjoy it so that 10 years from now, i'm happy.
xo

I had to come back and read this again, fuck, you just nailed this.

Also, I had a real live nervous episode the first time I went to Paris. PARIS. Not because I was in Paris, but just life, you know?

love this! Entirely what I feel. xoxox

You did nail this...as always. You are such a talented writer. I don't know how you are so good at building such great stories, with all the tiny perfect details...and then...the giant lump builds in my throat and my eyes fill with tears.

Your posts are the best! Please never stop writing.

As a 50+ reader I can tell you that you'll look back at your 40's and say "why did I care about turning 40?" and "look at my gorgeous skin I had. look at that neck. my neck looks awesome." Unfortunately we never appreciate what we have until it's gone.
I always ask my friends at what age do we say "wow.my body is fabulous! My legs take me where I want to go. I have hands that teach others. My arms give amazing hugs. My eyes see the world as I would like it to be and I have a brain that can make it happen." When do we appreciate what we've become?
I'm getting there. I think it's all about living in the now. the present. realizing that all those lines were caused by years of memories and living life. and appreciating where you are now.

Thank you everyone. Sounds like it's a universal feeling, that yesterday was better, tighter, hotter...

It's silly to think we will never pine for the necks of our younger selves, but for today at least, let's all promise to love where we are right this very minute. I for one am sitting in my bathrobe with unshaven legs; I can feel my pooch. Aka, I'm furry and cozy and soft. :)