The first time I hated someone I was selling lemonade on the corner of Scenic and Elm. Only my sign said lemonaid stand, and when the lady down the street told me I was so cute because I was so wrong, I hated her. She was tall, thin, fabulously beautiful in the way that young women were in 1977, all perm, teeth and range-y tan; by the end of that summer she was dead. Drug overdose or suicide, not sure which since nobody told me. Her house wrapped with yellow police tape excited me. Hate is a bad word, said Mrs. Coons, so I decided I just really, really did not like her.

Other bad words included shut up, ‘aint, nope and butt. 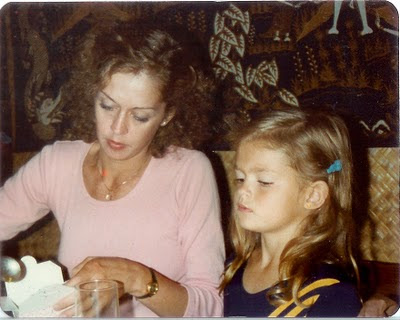 Me & my mom. Circa sometime.

The first time I thought I was pretty I wore 6 full skirts to make them fly up full when I twirled fast. I was who-knows- how-old and loved eating liverwurst straight from the tube with my fingers; sometimes I climbed on top of the counter to steal nibbles of baking chocolate no matter the bitter. Mirrors were magical and I was a princess with long dangley earrings and a pot belly for balance. (Prior to that I was not aware of the possibility of not.)

Other times I thought I was pretty: in the sixth grade when my name was on the list of girls the boys wanted to go with, on the island of Elba, the day I married Bryan in a $39 dress at City Hall.

The first time I cried so hard I hiccupped was when I watched a car in front of me careen into a tree ( I have since learned that cars never just sort of drift lazily into trees) and a boy from my school fell out of the car and then down and died right there on the pavement. I can’t breathe, I can’t breathe, I can’t breathe, is what I said, and to this day I am still disgusted because I don’t know if I really couldn’t breathe or if I just couldn’t breathe because there was another boy there that I liked and he was alive and so was I and not breathing seemed the right and romantic thing to do at the time.

Other times I cried so hard I hiccupped: when my cockatiel flew into the ceiling fan, when Bryan broke up with me, the time the doctors said Zoey’s rash was probably nothing but leukemia should be ruled out nonetheless.

The first time I felt worthless was walking home from Wade Thomas one day with two other girls and they said I couldn’t walk between them and then later one of them loaned the other one money for Jolly Ranchers and they played Centipede shoulder to shoulder while I stood a little bit behind them, sure that my breath smelled as bad as that of the teacher’s aide since it certainly didn’t smell like artificial watermelon sucked flat against the roof of my mouth like a retainer.

Other times I felt worthless: making the Homecoming float Senior year, how I talked shit about Maya only to turn around and see her there, shoulders shaking, the two times I was laid off, anytime I yell at Zoey. 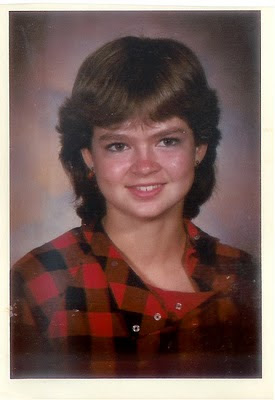 The first time I French kissed someone was at my first boy-girl party in the 7th grade. His name was Dave and it was 3 minutes in a very dark closet while everyone else waited outside pretending this was the sort of thing they did all the time. Dave’s lips felt blubbery, his tongue fat. He tasted of Doritos and 3 minutes is a very long time to not breathe, a tea party at the bottom of the pool when your body’s natural reaction is to rise to the surface.

Other memorable first kisses: in 8th grade when Bryan walked me home and I leaned back against the chain link fence so he would be taller, the first time Zoey pressed her her teeny rosebud lips against my mouth and meant it.

The first time I knew everything would be okay was sitting on my mom’s lap and playing with her necklace, a flat crystal disk with a palm tree etched into the center. I used to press that crystal between the hollow of her clavicles pretending it was a swimming pool that smelled of Velamints, cigarettes and Paris, the perfume. Somewhere in that same memory is the shade of a kumquat tree, though I’m not quite sure how or even why.

Other times I knew everything would be okay: each year when the leaves skitter and again when the plum trees blossom, when I hear Cat Stevens or Jimmy Cliff, early morning in bed with Bryan and Zoey, when I fall asleep at the beach and can actually feel the earth moving and dancing and spinning, alive, everything temporary. 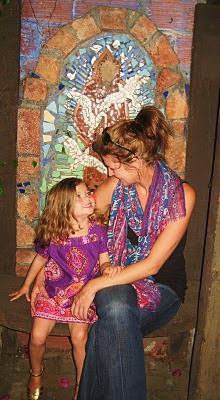 zoey is a lucky girl to have you. happy new year's

I love your writing, but this was my favorite BY FAR! love it. That photo of you and Zoey on the bottom is perfection. Don't you wish EVERYONE had the same look in Zoey's eyes when you met them? Life would be awesome. (not that life isn't awesome, but it could be WAY awesomeer0

Love it, S. Great writing to start off a great New Year. xo

P.S. Happy First to you too!

The first time I read your blog, I was a work with a showroom full of co-workers and clients...I had to leave the room to collect myself. I was laughing at frogs ribbeting on asses, unicornanus', something Zoeey said, your truths, your words.
Thank you for that first, and the many days that followed, and the many more that will.
Happy New Year.
xoxo,
Brandi

Lovely writing. Thank you for the peek into your firsts. I wrote a post a while back where I touched on those times of feeling worthless as a girl. It warrants a month of posts.

And holy do you and Zoe look alike.

Oh,Rashaan. He used to come and watch the girls in my PE class when we were swimming. He was always so funny, and my heart broke for him and his family when he died.

I loved your memories, here's to a new year full of wonderful new ones.

Thank you so much. Lovely.

even hours into 0h-TEN you're already dazzling me. thank you miss susannah.
xo, katie

That was perfection,love it!When you actually forget where you are when your reading and time just stands still for those moments while you've escaped into the writers world you just cant top that feeling.And than the whoosh back to reality when its over and you have that brief moment of sadness because theres nothing more to read,but still that tingly feeling is left over from the magic of disappearing for awhile,than you know...that was a good BLOG!Thanks.

Thank you for being someone who finally says some of the things I've always felt about not feeling like I fit in or was - gasp - not popular at a time when that was the goal in life. How nice it is to grow up and be fine being who we really are. And what ever happened to all those 'popular' people? Very cool post and I loved it.

it keeps freaking me out to see pictures of you when you were little. it's like staring at pictures of zoey in a vintage scene.

I love this post. It is so well written and brings back so many memories of girlhood! I also love the 7th grade picture!

This isn't the first time I leave your post with my head spinning from such incredible writing!

Looking forward to more head-spins in 2010!

You and your mom could be you and Zoe. And I love the way she looks at you. This was beautiful.

PS I love the double meaning of Happy first. Not that you necessarily intended it, but knowing you, you did;)

beautiful post. And one of the best 7th grade photos, ever.

I'm with you on Cat Stevens and Jimmy Cliff. They always make everything ok!

The first time I hated someone was my fifth grade teacher. I was a goody-goody and I had never cussed in my life, but I told my best friend that he was an asshole.

Oh, and your seventh grade photo? In my latest blog post I compare myself to Jessie Spano from Saved by the Bell." So, yeah, I get it.