Anyone know where a girl can get 1.4 million beetles? Because take a look at this: 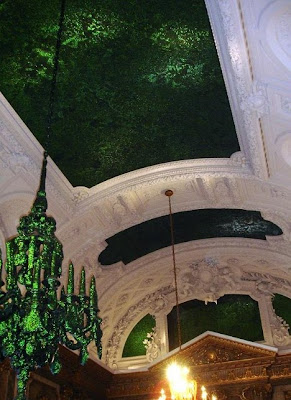 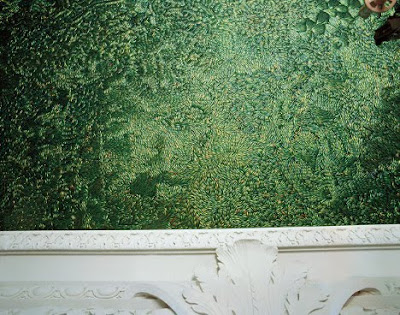 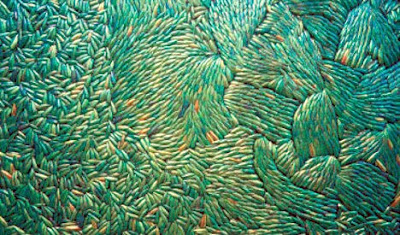 Known as "Heaven Of Delight," this stunning art installation can be found at the Royal Palace in Brussels and was the brainchild of controversial Flemish artist Jan Fabre, a man renowned for working with all sorts of media including blood and sperm. Personally I do not take my art with sperm, particularly when the canvas is a ceiling and the medium is bodily fluid. But this? This is incredible. 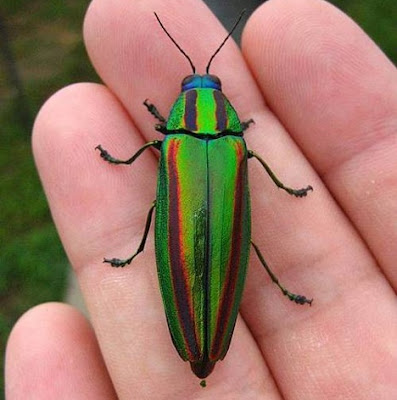 To create the luminous green effect, Fabre used 1.4 million Buprestidae, commonly known as the jewel beetle. Apparently it took Fabre's team of 29 people 4 months just to glue the beetle shells to the ceiling.

And that's that. I want to do this to my ceiling. Okay, so I probably won't need 1.4 million, but maybe 500,000? Anyone have a 500,000 jewel beetle carcasses to spare? But only if they died of natural causes. I do not abide by the ritualistic killing of beetles.

In other news, now I totally want to get another cat and name him Scarab.

dude. you just put up a picture of what my ceiling in hell would look like.

You could do it with ladybugs!!

I will be honest with you here. I am freaked the eff out.

Ick. Pretty from a distance, but the concept is fairly disgusting. I am sure they did not find 1.4 million pre-dead beetles.

Much better than if he had used blood and sperm.

I'm kind of creeped out a little bit. Do the carcasses break down over time? What happens then?

It is kind of gross, but I think more beautiful than terrible.

The artist says he got the beetles from universities and from Thailand, where the beetle is fried for consumption, the shell discarded.

As for the ephermal look of the art, Fabre says, "The color of those beetle shells will never fade, for the outer integument contains chitin, one of the strongest and lightest materials on earth, which was used for objects destined for the Mir space station. Scientists are once more studying the world of insects. I love the durability of things."

That is incredible. Where can I get those beetles?

I think I did not want to know that it was beetles, I really have a thing about insects though, I understand it is important artistically :) Maybe you could start a farm for your next project... ick, eeeewwww....

Those things dive bomb at me on the patio I can probably catch 4 a day for you. We might loose a few to squeels and smashing them out of insect terror so only plan on 2 a day I guess.

They are pretty but so large, and the sound is like an airplane dive bombing your head. I think the like movement or something.

Has no one thought to mention the obvious step in this artistic process that is truely, well, truely a whole lot of adjectives, ie, gross, tedious, amazing, disturbing and sticky, etc...

It seems that if they caught 1.4million beatles, and only used the shells, well: they had to shell 1.4million beatles. I'm all for beatle shucking, for art's sake or otherwise, but my god, such a task. Blood would have been easier, sperm, more fun.