Now You Know: If You Got a Crank Call Today It Wasn't Me, Although I Am Cranky

I have found my new business model: the phone company. Of course I don't know what type of business I will be running, what I will be selling or doing or even wearing to work, but now I know just how I want to run my business should I ever start one and it goes a little something like this: 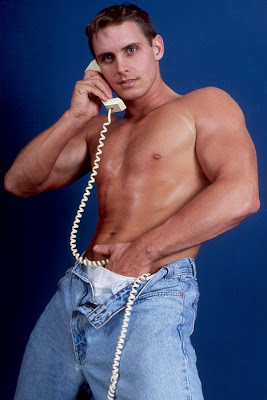 (I am pretty sure he's just ordering a pizza, don't you think?)
See, none of my phone jacks are working at the new digs so I called the phone company and they gave me a 12 hour window when they will show up to fix the problem. 8am to 8pm. It is now 6pm and for the past 10 hours I've been upholding my end of the bargain by waiting. I take my waiting very seriously, all front porch and nose to the window, baited breath which smells suspiciously like York peppermint patties, thank god for fun sized. Now all these 10 hours later I'm a little worried the phone company isn't going to show up. I mean, I would call them to confirm? But, yeah. There's that. The fact that my phones don't work and I am losing patience and my Tivo is apparently not compatible with the HD tv that miraculously sprouted up in my limbo'ed absence so I get all of 12 stupid channels and still don't know what the fuck HD tv is or why I need to see Bret Michaels in high definition. Moving sucks. Ass. It sucks ass and nothing is more depressing than empty boxes and lath and plaster walls, nail holes that aren't your own and not being able to find your broom or your Tylenol or your sense of humor, your clothes in garbage bags, coat hangers poking through. (Except maybe 44 toddlers dying in a daycare fire in Mexico--that is more depressing than lath and plaster walls for sure, but still. Jesus.) Moving sucks ass and my friends should be happy I have no phone service or else I'd be calling them to complain.
Love,
Susannah p.s. Know what else I hate? The term "new digs." I don't know why, I just do. Back tomorrow with an attitude adjustment. I also hate the term "attitude adjustment." p.p.s. It is now 9:22pm and guess who never showed up? stop The phone company. stop I am totally bringing back Western Union telegrams because phones now officially suck it. stop Twelve hours. stop. No, you stop. full stop

know what i hate?
when people constantly ask you how your new digs are coming along.
ugh, makes me wanna punch 'em in the face.
XOXO

Moving does sucks. The world is in agreement. The only times I have really disliked my husband - we were moving and he hates moving more than me.
Whine away.

but on the upside- you don't have a mortgage payment :) I know..I know...put a sock in it.

People just have to adjust to your attitude. It's them... not you. Moving does suck. Unpacked boxes suck and phone companies who stand you up can suck my big... toe.

Ugh, sounds like your day really went south after we left yesterday. And you now feel about the phone company the way I do about Direct TV. Moving sucks. Agreed. But the good news is that your new house is a VERY happy little house with great energy, charm and character (even if it is a rental). I think you guys will be very happy there (once you get a phone, of course).

I'm with you on New Digs. How stupid. Grrrr. Moving sucks and waiting then being disappointed.

The phone company is the worse company on the face of the earth.

They KNOW they have us by the balls and laugh a million laughs when they give us that 12 hour window of time.

At least if you call the Gas company and say you smell gas they send someone out in 45 min or less
Just in case...

You and I are in the same boat! Except when I call my phone company, the pretend not to speak a lick of English. But they do. Our Internet has been out and every time I call I get some made up excuse. First we had "it was a fibre optics issue" then we had "a cable in the Atlantic broke and it's a worldwide issue" and today we're told that our house "lies in the problem area. It's a nationwide issue, so our house falls into that area, lah." I wish I could even make up lines that good.

Then when they don't show up and you call they tell you, "we fix. can. can, lah. tomorrow, lah. good day." (click) Tomorrow comes and goes. And repeat.

We moved the last week of May, and guess who's house is still mostly unpacked?