Ish Is My Middle Name (Not Really. It's Clay, But I'm Thinking of Changing It To Ish)

I think we can all agree that moving sucks ass. Therefore, logic would have it that moving twice in one month sucks ass, and then some, though I would be remiss to name the then some. In my case, it seems to have sucked any creativity out of me. (I guess I store my creativity in my ass. So?) I mean, I could go on and on about the best box for a blender, but right about now the only person who cares is Bryan. Last night we lay in bed and whispered sweet nothings of packing tape and dollies, sexy time in a box marked fragile. So yeah, today I am calling this one in and posting about someone else's creativity. Paxton Gate's Curiosities for Kids. If you don't know about the original Paxton Gate store, you're missing out. Located on Valencia in the Mission, this store has long been my fave by selling taxidermied animals, fossils, bones, beautiful artwork, minerals, epiphytes and other out of this world plants. They have now opened up a store for kids down the street. Only instead of selling taxidermied mice dressed as the Pope, they sell hand knit frogs sliced open for dissection, wooden toys, science kits, metal trains and old timey games. 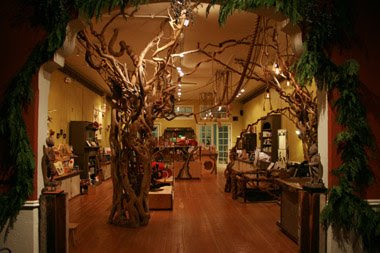 Zoey was entranced by the tangled strangler vine in the entrance, and later, she got to plant a California poppy seed in one of their daily workshops. My mom bought Zoey one of these mounted animal heads. This is, of course, a pic of a bear, but we got the mounted stuffed giraffe head. Immediately I had to pack it away in a box and told Zoey it was for her new room. I don't know who was more disappointed--her, or me--because seriously, a mounted stuffed animal giraffe head is something I never knew I wanted but needed to have. 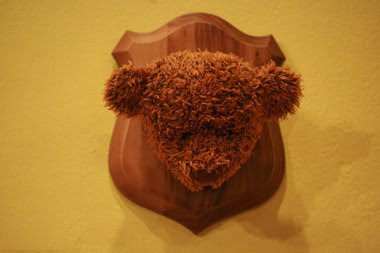 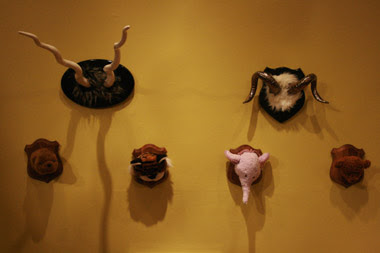 No surprise to anyone who needs one of those... (ME)

Zoe is a lucky, lucky girl! (Who has a VERY nice Grandma Glitter.)

Kids today... So lucky with their morbid and mounted stuffed toys. Not fair at all.

I love Paxton Gates and if I was with child Im sure the new space would toonce my noodle to. Looking forward to posts of the new home and decapitated giraffe head.
xo

haha! that is sooooo cute. love it :D

The Paxton Gates-regular and child versions are indeed incredible stores and I thank you for introducing me to them. The original Paxton Gate is so filled with things I love that it is both a delight and a torture to go there with limited funds. It is almost impossible to make a case for HAVING to have a fossiled badger penis!
I must confess to you, my Sweet Susannah, that when we were last in Paxton's Gate, the big people's version, you made my heart swell with pride and I carried around smiles inside the rest of the weekend. Why, you ask? When you "had to have" one of the Mudfish sharks pickeled in a lab jar of alcohol...that was when I KNEW that you DO carry a lot of me inside you-probably more than you know or want! There was a time not long ago when I would have swooned with delight, my fingers clutching my dollars in anticipation of taking home my very own pickeled shark in a jar-but you would have been totally disgusted with both me and the innocent floating shark. Eeeeew, MOM! I can hear it now. But that was then and NOW we proudly buy our dead sharks in a jar TOGETHER! You make me proud to be your Mom (for this and a million-gajillion other reasons!)
Mom

I need one of those animal heads in a bad way.

Girl, I'm right there with you, selling, buying, moving ... all that takes a lot of brain power. Soooo, all the cells I had left from the 80's are currently being used for grown-up thingees like contracts, bank statements, and vaccuuming.

I'm going to try and post something today. I am. I really, really am.

Hey! Love it!
I think it's good that they want to stimulate the minds and the creativity of our kids!