One day Ozzy is going to have a daughter named Dottie and a son named Zack. At least that’s what he says, and I cannot wait to meet my grandchildren. Well, I mean I can wait--at least 20 years or 30, but still, the idea of them is there. I can feel it. 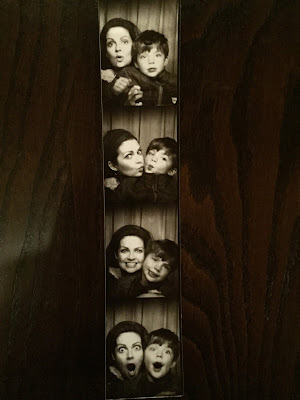 In the meantime, I have this. This Slurpee-lipped boy who says he wants to marry me. He told me so the other night as I was putting him to bed, and all Oedipal-Ewness aside, I would totally say yes if I weren’t already married, 38 years older than he is, plus his mother. Instead I will settle for saying yes to whoever he chooses to love. Yes, I will love him forever, her, too, or him, whatever, plus little Dottie and Zack. I love them already, the family that he will one day have. Which is good since, as he just told me tonight as I put him to bed, he will probably have to find someone else to marry when he grows up, because I will be dead.

the best! he is the cutest.. XOXO

PS and you look beautiful! XO

Darling.
And hopefully you'll be as lucky in the future as I felt on my birthday, on the weekend, reading my adult son's long post to me on my FB timeline, declaring his love and admiration for me.
I done good!

Much like his Father, Ozzie has impeccable taste in women.