It’s raining, the kind of rain that makes you feel soft inside, the kind of rain that makes you sad when a stranger holds the door for you, but happy/sad. That kind of rain. I have been thinking about Aleppo, so much so that I checked the weather there. It is sunny with a high of 74 today. Not sure why I checked or what that means, if it matters. The other night I made myself read about what is happening, watched coverage of the fighting, and when I couldn’t stand it any longer I shutdown my computer and watched Real Housewives of Beverly Hills. I felt a little bit like a teenager, how I used to sit and stare at the stars trying to wrap my head around space. What does it all mean? Dorit’s husband surprised her with a Buddha-themed party plus a rose gold Bentley, because nothing says Buddhism quite like a new Bentley. How can that exist in the same world as children being executed by regime forces? Try to understand the end of the Universe, I dare you. 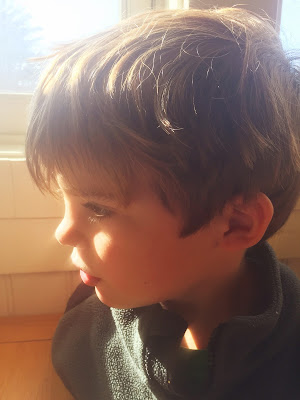 This morning Ozzy got his first cavity filled. The dentist used nitrous oxide rather than novocain because he believes kids shouldn’t be afraid of dentists. He called me over at one point to look into Ozzy’s mouth as he drilled a teeny hole in one molar, then showed me how he packed it with plaster. The office was clean and white. Ozzy hugged a dinosaur stuffie holding a toothbrush and giggled the whole way though. It was impossible not to think of the story I heard on talk radio, something about how a child in Aleppo with a life-threatening injury had to wait 15 days for medical help. Can you imagine being his mom? The helplessness?

Stop it, I tell myself, feeling grown-up Emo, my bangs in my eyes, always thinking of the bad stuff. What can we do to help? It’s almost Christmas and I have donated to as many places as I can afford, though I know that term is laughably relative. Last night as I was putting Ozzy to bed and singing one of his favorite night-night songs, he put his hands on my face and pulled me toward him. You have a beautiful voice, he said. For the record, I don’t, I really don’t, but later I asked Bryan if he would ever consider adopting a child from Syria. There will be so many without families, I said, but he said no. He is done having kids, and we don't have enough money, and, if I am being honest, I agree. But still.

I love rainy days, really I do.