Last weekend I went to Target with the kids, which is nothing to write home about, let alone worthy of breaking a month-long blog silence. Target-run, the meaning of which has come to be mundane, safe in its very basic-ness. Except it wasn't. Kind of. I don't know. You tell me. 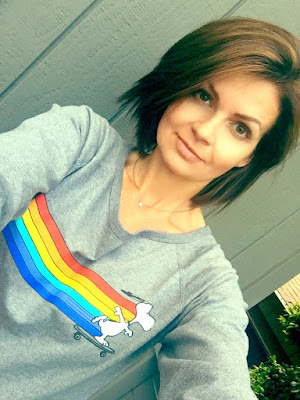 I was in a long checkout line when the man in front of me turned around and abruptly asked me where I got my sweatshirt. Um, Modcloth? I said, a little surprised that he was in the market for a skateboarding Snoopy sweatshirt. So is that like a gay thing? he asked. Is that a gay rainbow? His tone was off. Edged. Sneeringly flat. I could sense Zoey listening next to me, Ozzy not sure what was going on. Yes, I said, it's a gay pride rainbow. I made eye contact with him as I said it and did not smile. He turned back around.

I am not gay. And sadly there was a sense of safety knowing that as I stood there in that line with that man who obviously did not like gay people. At any point I could have said, I am not gay. A get-out-of-jail-free card for homophobia. I am not gay. The knowledge of which almost made me feel worse because what if I was? Exactly how much did that man hate me? What would he say or do in front of my children?

The kids were uncharacteristically silent, not asking for gum or those stupid little plastic toys at the checkout. At one point the man turned around again and with the same flat voice asked Ozzy how old he was. Five, I answered for Ozzy. The man did not look at me. I wondered if he would follow us to our car. I am not gay, I thought, but I love and support my friends and family that are, so it actually doesn't matter to this man, to me.

The man was buying a coffee maker that was supposed to be on markdown but came up at regular price, so he had to wait for a manager to adjust the price. Rather than wait at customer service, he stood right there at the register closely staring at us while I was rung up. He was still waiting as we left.

In the car Zoey asked me what happened. I told her the truth. We had a good conversation about how some people don't like other people because of their skin color, religion or sexual orientation, and how it's important to stand up for human rights. That guy seemed weird, she said, and it was true-there was nothing he said explicitly that was threatening, but we felt it. So we also talked about trusting your instinct, how it's the most important self-defense tool we have. Something was wrong with that man.

Here it is almost a week later and I can't shake the feeling. I am not gay, but that fact is inconsequential when there are people who hate me just for wearing a rainbow Snoopy sweatshirt at Target on a Sunday with my kids.

Welcome back! What a great commentary for your kids and all of us.

Can't believe shit like that still happens. But you handled it beautifully.

Side note: your hair is looking fantastic.

you're judging him for judging you and also ending the blog in a victimized fashion with a me vs. him persona

Anon: you're judging me for judging him for judging me, i.e. you're ridiculous so I'm ending this comment in a non-victim way by saying shut the fuck up.

there is no shortage of dickheads in the world - luckily though they are outnumbered by good people.

Thanks solo roving and everyone else. Love! Is all.

Thank you for writing about this, and for how you handled the situation. I think it's especially important for those of us who aren't gay to stand up and make people like that hateful guy realize that he is in the minority. I ache for my gay friends and family, to think there is still so much hate out there, towards them. And the above 'anonymous' uses ridiculous logic - trying to assert the false equivalence that you are no better than the creepy guy, because you are judging HIM. Yes you are judging him! Holy fuck, by that logic, we should not judge the KKK. "Hey, they're just expressing an opinion! When you hate them, you're no better than them! The civil rights workers and the KKK - just two sides of the same coin!" Insanity. Your STFU was beautiful.


If you were gay, I would get a sex change to be with your hot self!

That hair! You're looking great. I hope you're feeling great, too.

Your gut is right. Both with that guy and Anonymous up there. Nice to read a post from you! It's always good when I check in and there's a new one!

Why are dickheads always named anonymous?