The Rumors Of My Death Have Been Greatly Exaggerated...

Because truth is always stranger than fiction, Bryan received a handwritten note from Kaiser Hospital yesterday. 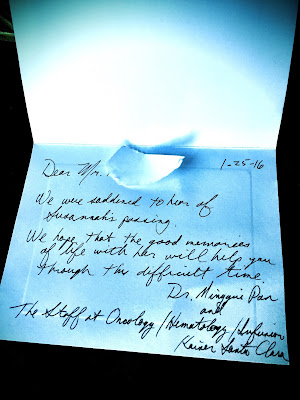 Dear Mr. ______,
We were saddened to hear of Susannah's passing.
We hope that the good memories of life with her will help you through this difficult time.
Dr. Something or Other Pan
and
The Staff at Oncology/Hematology/Infusion
Kaiser Santa Clara

Bryan was doing whatever guys do when they just kind of stare into the engine of their truck when I walked passed him to get the mail. Hey, you got something handwritten from Kaiser, I said, want me to open it? So I did, his head under the hood of his truck. I'm dead, I said, and then he stood up and we just kind of stared at each other.

It sucks to find out you're dead as the result of a clerical error, particularly two days after you have gotten such good MRI results. But there it was signed in black and white: I had passed away. And they were sorry about it.

Even though it's a few hours south, Santa Clara is where I had to go for hematology after I returned from Israel. Apparently, they oversee an HSCT program for leukemia at Stanford and are familiar with stem cell/bone marrow transplant after-care. But I haven't seen them in a few months now. Just another huh? in the long, strange story of my health. I am dead to them. What can I say? You win some, you lose some.

Of course I have put in a call to let them know that I am still alive. Unless this is some M. Night Shyamalan movie starring me as a dead woman who thinks she is still alive, in which case this is a really cool blog. But I don't think so. I think this blog is just kinda' meh and they have me mistaken for another Susannah with a husband named Bryan whose good memories of life with her will have to suffice to help him through this difficult time. That time. Whose time?

All I know is this: if I am dead, then I am here to tell you that there is no tunnel of white light. Just squabbling children, tortillas with black beans and extra cilantro, and a sunny, cold Sunday afternoon in a house that smells like fresh laundry. Don't worry--if this is it, death is pretty fucking amazing.


Unbelievable. I realize it was a mistake, but that is something that needs to be double-checked, before sending such a note. It's not like you all haven't been through enough.

It's wonderful that you had a good attitude about it. More important: I'm glad you're doing so well and your recent MRI results were clear!

Kaiser should do something extra-f'ing-special for you and Bryan. After a personal apology, of course.

I think this is the Doctor: https://mydoctor.kaiserpermanente.org/ncal/provider/mingguipan

Excellent sleuthing Mr. X! Yes I think that's him. The same office I went to in that hematology department, but I saw a different Doctor. No clue how/why they think I died?

But yes, they should at least send Me and Bryan out to a nice dinner. Last meal, perhaps? Seriously, it's unbelievable. Never thought I would see a condolence on my own death.

Here's a story that goes in the other direction. After presiding over my Dad's funeral, there was a card in the mail 2 weeks later from our rabbi, saying that if he attended synagogue on his birthday in a week, he's be honoured with an aliyah (chance to read the torah--which is a nice way to acknowledge someone). My mom was so surprised and upset by this that I had to be the one to write a scathing email to the Board. We got a tepid apology--yeah, yeah, the cards are put in front of him in a pile...who looks at what they sign?

Your account of this made me LOL so hard that I got snot on my iPad.

Good Enough Woman: I bet that SNOT what you expected!

This post cheered me up. Nothing like a false death notice to do that. Peace to all of you and a lateish Gung hay fat choy!