Friday: My Most Revealing Post Ever (Note The Use Of A Colon)

There are so many ways to start this post, none of them mature, so let's just get it out of the way because shit's about to get real around here. For years I've been nagging my doctor to schedule me for a colonoscopy because my uncle passed away from colon cancer at 40, but my doctor said I could wait until I was 50. The thing is, I didn't want to wait. They say that death begins in the colon. Now, I'm not sure who "they" are, but that's a pretty shitty thing to say. Not that I necessarily want a camera snaked up my bum, but I also know that shit happens.

Everyone who's ever had 5 feet of surgical tubing inserted into their colon will tell you that the prep you have to do the night before is the worst part, and I am not about to argue that point. (Seriously though--it's 5 feet; I asked.) I jokingly thought I would live-blog the event, or at least do a mock live blog, so I took this pic of me with the mixture of the stuff you have to drink before I even tasted it. Here I am perky, trying to be cute, happy if a little hangry from having to fast for the entire day. Looking back on this pic I see what an asshole I was being, no pun intended, because... 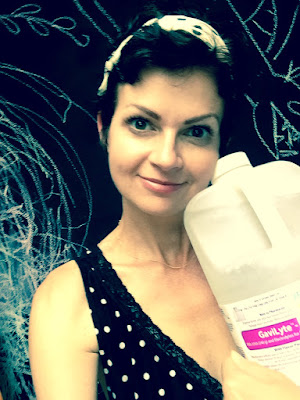 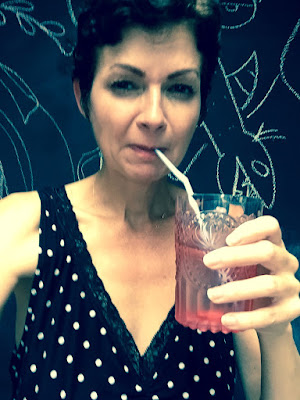 After this picture, i.e. after the very first glass, everything went dark. As in the mean person spit started to work, and holy fire hose, people. I think we can all agree that my trying-to-be-funny idea to "live blog" the event was beyond fucking stupid. There are simply no words to describe what occurred in my bathroom for the next 8 hours, except to say that Bryan slept on the couch that night and there was a point sometime past midnight that I thought for reals that I was probably going to die from the sheer velocity of it all. I mean, if I didn't shit myself forward, cracking my head on the tile floor, then surely there was a very real possibility of me falling off the toilet because I was so dizzy from the medicine and the not eating. And the shitting. Did I mention the shitting?

You guys, believe me when I say I am someone that has gone 4 decades without admitting to ever having gone poop. So the fact that I am even writing this post is a testament to a.) my absolute disbelief that colonoscopies are a thing we should all do, and b.) that I want people to be less afraid of shitting themselves to death via colonoscopy than shitting themselves to death via cancer.

Because I didn't. Die, that is. The next morning I woke up and had to drink yet another 2 liters of the mean person spit. Only this time it was less violent as there was simply nothing left to vile. Except bile. Out of my butt. Too much? Please, we've come this far. Bryan drove me to the hospital with me clenching the whole way there while Googling on my phone "do people ever poop on the doctor during a colonoscopy?" (Surprisingly, there were not that many direct hits to this inquiry, which I still think is a valid question.)

I had wanted to Sharpie something on my butt for the doctor beforehand, but in the throes of prep I forgot to be funny. Instead I just asked him if anyone ever did that, and he said yes, once he had a guy write Go Giants on his ass. I laughed, and thought for a second that I should probably tell him that when I was little I had swallowed a Weeble Wobble once, that he might find it in there because I don't remember it ever coming out, but then I thought that maybe he would think that I had put it IN my butt, so I didn't say anything, suddenly ashamed of that 35 year old stomach-acid-eaten Weeble Wobble, and then they put something in my IV and all of a sudden it didn't bother me at all that someone said they were going to insert the camera in my rectum now. There was a power ballad on, and I was awake but also not, as I usually am when listening to power ballads. I guess my eyes were closed; I guess some time went by. All I know is that there was some tugging and pushing and then the doctor said there was a small polyp, and I opened my eyes and looked at it on the screen. Yes! I said out loud, which was maybe a strange thing to say, strange to say anything at all, but I was happy that there was a reason for being, or a reason for shitting, a raison de la merde, I don't know. Just yes?

Later, after it was over and I was dressed, the doctor came out to shake my hand (dude, I know), and to tell me that they had taken one small polyp that was probably nothing but they would biopsy it. So it was small? He said yes. Like small and dainty, a pretty polyp? He said it was not dainty per se, just small and probably nothing, and then he told Bryan that I was not allowed to drive for 24 hours, or cook or go on social media, that I should probably just stop talking because I was still under conscious sedation, which seemed very modern and fair. The rest of the day had rounded edges and was pleasant.

So there it is. In 10-14 days I will find out that my polyp is most likely nothing, but if I had waited until I was 50, who knows? The bottom line (groan): if I can do it, me--someone who barely acknowledges pooping--then you can do it. Please, get a colonoscopy.

And because you stuck with me this long, this, just for shits and giggles...
xo,
S

My husband had his first colonoscopy a few years ago and I will never forget the image of him trying to get to the toilet in time, clenching and sort of rocking back and forth as he walked (ran?). I was supportive in his presence, but as soon as I got to work the next day I retold the story and was CRYING, just CRYING with laughter at his expense. Karma's a bitch so I'm sure I'll crap myself at some point soon.

but just think how you cleaned out all the "junk" and now you can start fresh!! oh shizzle you're not eating donuts anymore are you?!

you know the whole grown up thing... mammograms, girl checks etc - getting old ain't for sissies

I've drunk that stuff 3x for 3 procedures and the only thing that let me make it to the end was licking a cut lemon after each swallow. Don't know why this works but it makes the experience doable. I hope you don't have to do this ever again, but even with your polyp benign, they like to keep checking. Lemons are the ticket, trust me.

Man, that was funny! Wonderful writing, too, as always.

Good luck on the pending report.

I finally found it. Did you ever see the movie "The Right Stuff"?

Oh dear ... I felt for you when I was reading your post. Glad you survived it and that you can laugh about it. Hoping you get positive results.