What I Did On My Summer Vacation

I stopped eating gluten. Developed a taste for ghee. I learned the fine art of pomade and we swam in the pool, the lake, the ocean. (Not that those things are necessarily related.) We watched Charlotte's Web and Stand By Me, both of which took some fast forwarding. I told Ozzy to say please when he yelled at me from the bathroom to wipe his butt. I did this 243 times.

This is the slow end of that particular montage, and while I know sentiment is cheap, I can hear the music rising.

Today was the first day of school. It slips in quietly surrounded by noise, and before you know it you are taking photos of a 4th grader and your son in Pre-K, standing on your lawn brown from the drought. 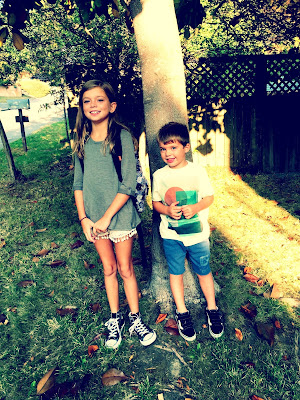 4th grade and Pre-K. This is the first day.

This post reminds me of Tom Hanks' character in YOU'VE GOT MAIL:

"Don't you love New York in the fall? It makes me wanna buy school supplies. I would send you a bouquet of newly sharpened pencils if I knew your name and address. On the other hand, this not knowing has its charms."

Wishing you and yours a Happy Fall with just the perfect amount of rain to offer some much-needed relief.

Susannah, I just wanted to apologize for my crappy comments from earlier, and wish your family a wonderful (school) year to come. (Happy emotiji )