Today I want to take Ozzy somewhere, anywhere, to a place where we can throw coins into a fountain. I want to hold my breath and drive him through the rainbow tunnel, look up at the sky at the first star together even though it is only 9 am. I want to wish and have it be heard.

Someone made the observation the other day that Ozzy and I have the same hairline at the nape of the neck, both of us curving to the left. Bryan says I have a category 3 hurricane forming at the top, a category 2 on the other side. He swirls his finger around the impending storms on my head when he passes me in the kitchen. Meanwhile the lady who cuts Ozzy's hair says that if I have another baby it will be a girl, something she can tell based on his double whorled cowlicks, an old wives tale if ever there was one. Moooo, Bryan says, pretending to lick Ozzy's hair. I don't tell the lady we are probably most certainly not having another baby. 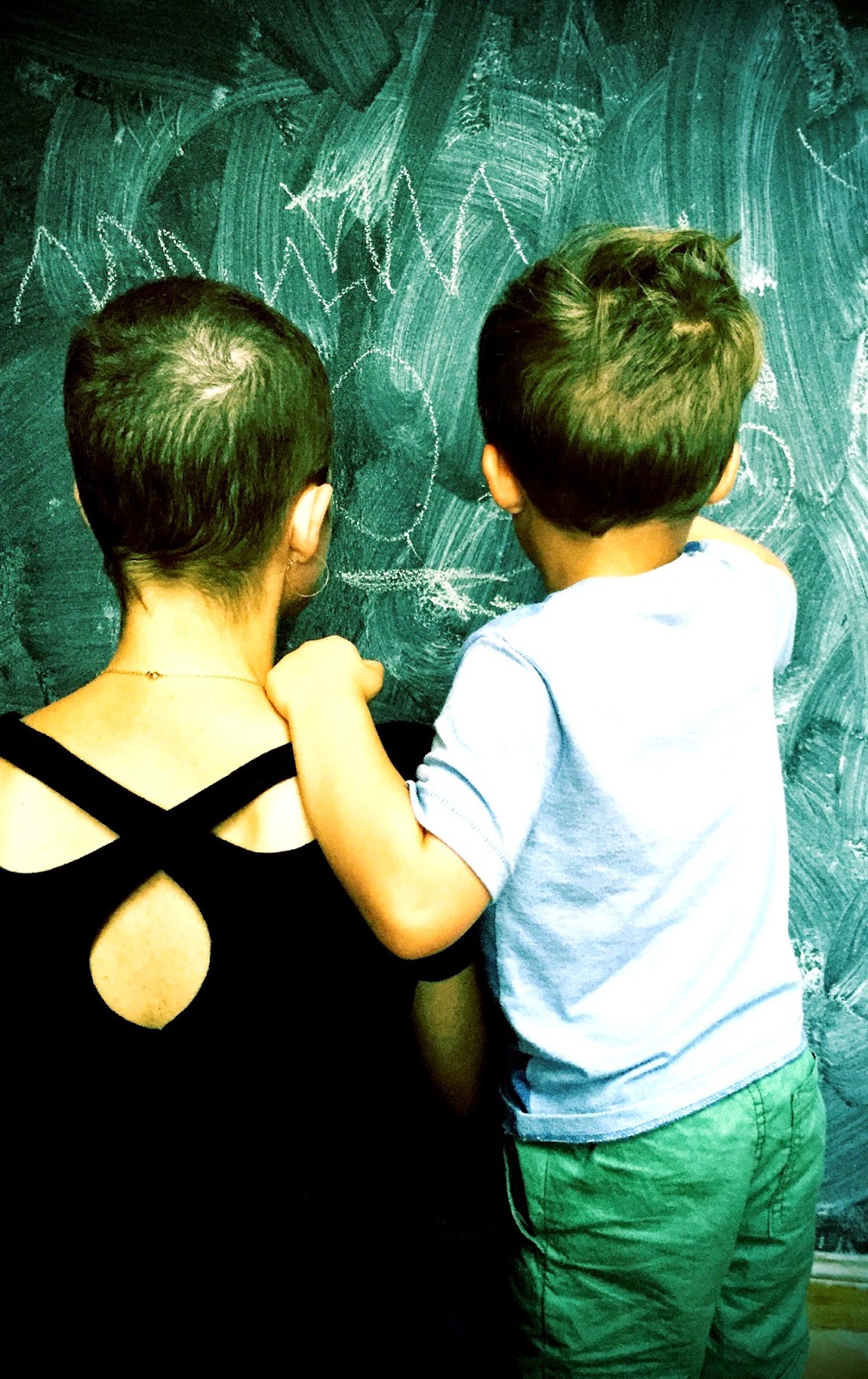 Ozzy is having trouble with friends. The boys won't play with me, he says through lips wet with being almost 4. My heart shatters into a thousand splendid pieces. I tell him to ask nicely, to play with the girls, to maybe play whatever they are playing even if it is not a game he wants to play. Play a game you don't want to play? I repeat this in my head and hate myself for saying it, for not knowing how to fix anything.

When I was in Tel Aviv I researched everything about everything, and while talking to a professor in the waiting room about the role of alemtuzumab as a monoclonal antibody directed against the CD52 antigen of lymphocytes, he asked me if I was a nurse. No, I said, wondering why he wouldn't have assumed I was a doctor.

Because this is what I do when I don't know what to do, I Googled it. All of it. What to do when your child is shy. How to help him make friends. How to hold your breath and make a wish, because who hasn't felt invisible at one time or another? I wouldn't want to know somebody like that. There is a shared feeling to being alone, a monoclonal antibody made up of cells cloned by a parent cell. Of course Google has a vast opinion on what I should do, how I should talk to Ozzy. Google even tells me that having a double whorl in your hair is called a Double Crown, a symbol of genius to some, a promise of difficult haircuts and a future of bad hair days to others. I decided not to say anything more for now. Instead I held him tightly, his body a pleasing weight against my shoulder as he leaned against me smelling of shampoo and cereal. Today he took a robot to school for sharing.

Awww, you guys look so cute together! I can totally empathize with what Ozzy's going through...I never really got along /hung out with my peers,but that's just because I'm weird...Maybe Ozzy is just too smart for them? (very very cute Albert Einstein emotiji)

Humans are an interesting species.

Generation-after-generation, billions of people have gone through many of the same phases. We're born, educated, have problems, find (some) solutions, perhaps marry, and, if we're lucky, live to an old age -- hopefully, in good health.

After thousands of years, it would seem we should have amassed some immutable laws about life, behavior, happiness, etc. But, despite my searching Google, too, I can't find a reliable list.

So, regarding Master Ozzy, don't fret about not being able to 'fix' the situation with the other boys. In fact, I would suggest there's nothing to fix.

Earlier today, I signed into Gmail and received a notification that someone had replied to a recent comment that I posted on YouTube.

The person commanded that I stop my "lying bullshit" and then called me "an idiot."

So, you may wish to consider that, when weighing my advice.

There's definitely genius in your DNA. Since the acorn never falls far from the oak, Master Ozzy's proclivity toward genius is not unreasonable.

I was painfully shy as a kid, missing out on so many things because of it and the only person who could bring me out of my shell was myself. I did learn it - even though it was difficult and uncomfortable at times. I wish my mother would have thrown me in the ring and let me fend for myself. She never did, but I did with my daughter! I made sure she could master any situation and at 5 she marched into Kindergarten like an old pro. When she turned 16, she became shy all of a sudden and now at 19 she's working hard towards becoming more assertive and outgoing. So there, you never know! Ozzy will be one of the cool kids in school - I know it!

Thank you all, a thousand times.

It's funny--I don't think Ozzy is shy. At least not so far. He's just caught in this strange gap between playing with the girls who then decided they don't want a boy with them. So now that he wants to play with the boys they won't let him into the group.

I followed your blog way back when I thought it was called a blob. And you were my favorite. And then years past and this morning I was drinking coffee, listening to my kids fight and you popped into my head, and I googled petunia face blog. And bam! Hiiiii! OMG you are still ridiculously funny. Please tell me you're on Instagram. xo

I'm just now getting semi caught up on your blog after a long absence. My sister told me about you having chemo for MS. I had chemo for cancer. One is not worse than the other. It all blows. It blows for what it does to your fears and mortality, what your children and husband are put through. I'm 15 months out of chemo, and the hair is still a work in progress. My 6 year old son and I have the exact same hair line- the two of us walked past a mirror when I had the pixie and was shocked by the sight of two of him! I've cut the horrendous mullet (why does it naturally grow so thick and long in the back, I am not by nature more party than business even though I wish I were!) So I keep cutting the back short, to let the top catch up….my new phrase as I use lots of hairspray is "Higher the hair, the closer to Jesus" said with the best Southern accent I can. Love the truth you spew, Keep LIVING!