How fitting that today is Groundhog Day, because same same with a side of same. What that sameness looks like here is this: urine test, blood test, Nadir making fun of me, asking to see my tits, me showing him my tits, me asking when I get to go home, him pulling my beanie down over my face and lifting me up into the air in a very strange side hug.

He said that this is where we bargain. Except, of course, he does not let me speak, monkey face, shut up! No questions either, so bargaining is more like me telling him to let me talk, then just talking over him, and when that doesn't work asking him how he ever woo'ed his wife. When do I get to go home?

My numbers are excellent. He says this with an intense stare, a smile, and surely I think this week, today, now. But no, he wants me to stay until next week, something something about the last 3 out of 4 people got infections when they left too early and had to be hospitalized; I am crushed. I thought surely not another Shabbat Shalom, that I would be home in time to watch the next Real Housewives on my couch. He gives me a shrug, and I guess this is what he meant by bargaining. You want to go to hospital at home?

Well, when you put it that way.

Then I met with Professor Slavin, the BMOC, or Scientific and Medical Director if you want to get technical. Slavin said I could go home whenever. Today. But not before he politely made a motion as if I should pull up my shirt, so I did, and he looked at my rash and made some notes. With a fountain pen. I kid you not.

So when is it? When do I get to go home?

The answer lies somewhere in a flurry of Hebrew back and forth, fast and loud. But seeing as how the only words I have picked up are yes, no, please, good morning, good evening, thank you and sorry, I have no idea what they were saying except that the end result is that I needed to pee in a cup again. You try making a sentence out of those words that means that all of this will be decided with placing my pee in a centrifuge.

So now we wait. Will the Groundhog emerge from his burrow? The lab will have the results of my pee in a few days. Or will the Groundhog see his shadow and there will be six more weeks of winter? I mean, that's a little severe. We're talking about the difference between me booking a flight for February 4 or keeping our standing reservation of February 10, but honestly, truly, those 6 days may as well be 6 weeks.

In the meantime, proof of Nadir. He is something of a chupacabra in that he doesn't allow photos of himself. But after the pissing match incident, my dad and I saw him outside of the clinic and he invited us to sit. It was nice, actually. He's funny, and as rough and as rude as he is, he takes it right back. So we sat while he smoked, throwing the burning butt into the flower bed behind him and then smoked another. At one point he offered my dad a cigarette, my dad who has smoked off and on my whole life, white knuckle quitting for years at a time until suddenly on the phone I hear the telltale inhale between words and call him out, his biceps a landing strip for nicotine patches. My dad has not smoked now for 2 years, but he took one of those cigarettes and lit up while I screamed, even pushed Nadir for giving him one. Then I took out the only ammo I had, my camera. And this, folks, is the elusive Dr. Nadir, albeit the lower 2/3 of his face as he lept over the table to stop me. 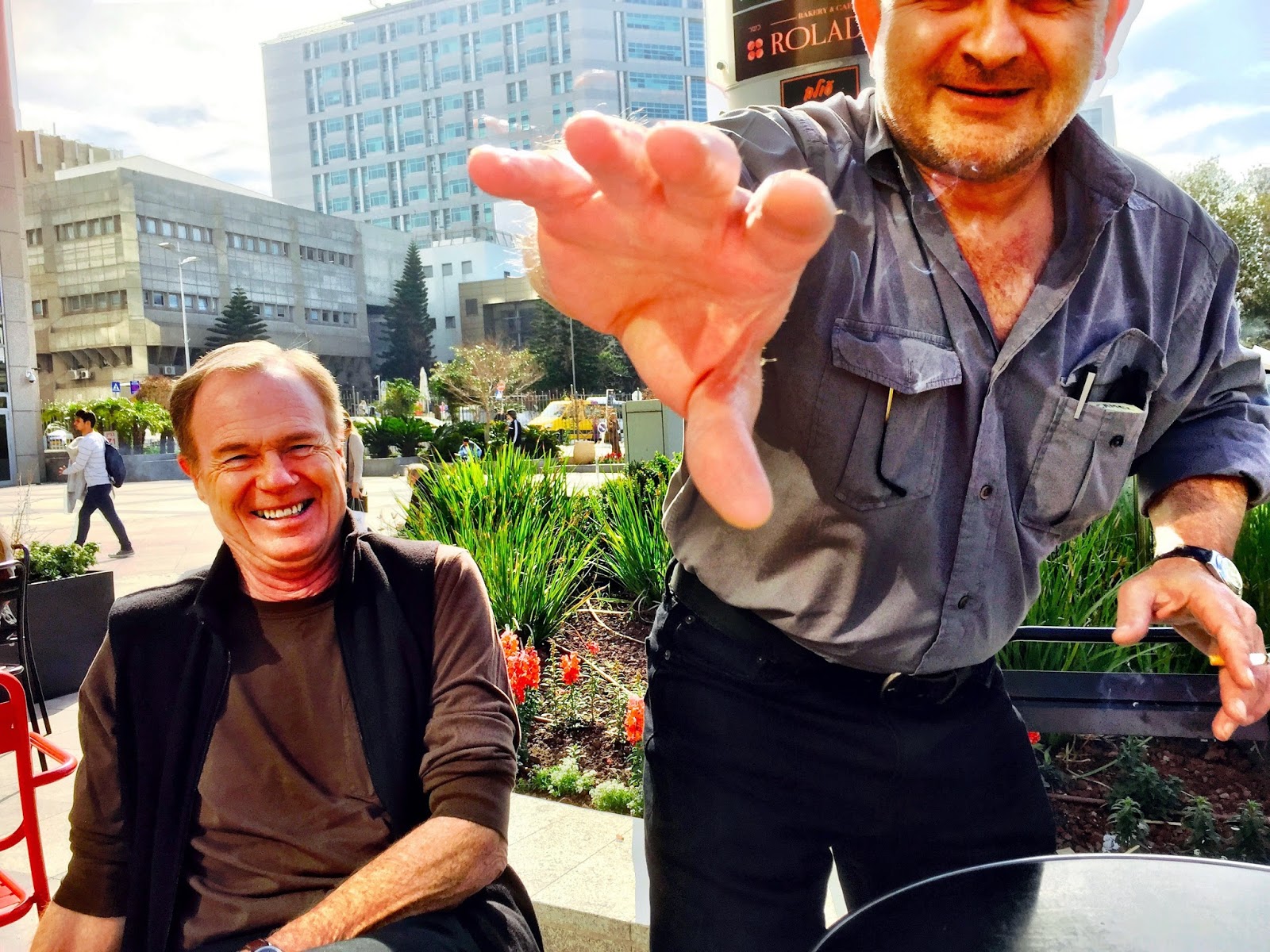 That's what you get for calling me stupid.

Despite all evidence that I should feel the opposite, Nadir is kinda growing on me.

Perhaps is crude exterior is an attempt to not get too close to all the 'Cute Asses' and 'Monkey Faces.'

Not that you asked, but perhaps a bit of extra caution is warranted, before you board such a long flight home? I think about how much I hate breathing that nasty air, even with a quasi-good immune system!

I'm delighted that your labs continue to get better. That's the best news.

Think about where you were, just a month ago. What you accomplished is pretty miraculous.

It's good to put a lower face with a name.

I'm happy to read your numbers are where they need to be so you can call yourself homebound. Rooting for you all the way.

Love the picture. I like Nadir. He's like a character from a movie. Sean Penn perhaps?
A quill pen? Hilarious.
Our kids need us, obvious. But it's amazing how much we need them isn't it?

Yes, nadir gets a bad rap for being so rude, mostly because he is rude. But he's also caring and funny. And apparently generous with his cigarettes, though I do not appreciate that part.

i love nadir. and i wish bob hoskins could play him in the movie based on your memoir.

As a kid, I hated smoking so much, I would empty my Mom's cigarettes from the pack, pierce each one with a needle, and then carefully replace them.

The ass-beatings I received were worth it.

Maybe you can do this to Nadir. You should pierce them at the base...but, in front of the filter.

When I was 16 and could drive, I went to the local "Gag Shop" (nothing like 'Pulp Fiction') and bought some of these:

This would be the best few bucks you ever spent. Just be sure Nadir doesn't have a heart condition. Or, not.

I dont care about his rudeness...thats the way they are out there. I just hope he is infinity smarter in treating you than making personal life choices....specially as a doctor.

Gah, I love this. Three cheers for you, my dear.

Dear Susannah,
So hoping that you get to go home soon. I know you must be just aching to hold your babies and be in your own home.
I agree that perhaps Nadir's gruff exterior may be an attempt not to get to close to patients? But what is he thinking, smoking in the first place? I realize he may not have known your dad's smoking history, but can see why that freaked you out!
Also, I just saw your vaccine post (such an issue here in Northern CA right now) and I had to share -- my dear friends' 8-year-old son was just diagnosed with bone cancer and is starting chemo today. A pediatrician friend was explaining what that will do to his immune system and all the danger he will be in for a long time, particularly in flu season and with the measles circulating. People think they are making a choice for their family, but it's really for all of us. THINK!!
To you, Susannah, take good care -- hoping you can fly home very soon!
--Erin from Sacramento

I feel like I can equate Nadir to an Israeli version of the Soup Nazi guy from Seinfeld. But a more lecherous version.

Contrary to what "show me your tits" would lead you to believe, Nadir is not lecherous. Just rude.

And Krista is spot on. He looks like Bob Hoskins, a lovable Bob Hoskins with absolutely no manners.