Wanna See the Ugliest Photo of Me Ever? (You Know You Do.)

You know that moment when you go to take a photo with your phone and your kids are in front of you doing something freakishly adorable, or maybe it's a stupid delicious salad, the image of which you must upload to Facebook immediately as proof that once upon a time a tomato glistened just so...so you click on the little camera icon all quick-like and HolyMotherofSweetJesusFuck! The camera is set on the reverse function and there's your big-pored, double-chinned shiny ass face staring up at you with that line between your brows and your eyes looking down all dumb and caught off-guard, you know? No? Just me? Well then.

Eff the reverse camera mode is all I have to say about that.

For the past 20 years there have been a dozen lost, mythical boxes from my childhood, boxes my mom said she had in storage somewhere. Photo albums and yearbooks, boxes of notes I passed in class, home movies, my prom dress, dried roses and issues of my high school newspaper...my brother and I were convinced it was all gone, the storage unit invoice lost, the contents auctioned off to a very disappointed man with a goatee on Storage Wars. Well slap my ass and call me Judy, as my mom has never said (but I have always thought she should say, seeing as how her name is actually Judy), but apparently the bill remained in good standing and I am now the proud owner of 12 boxes of my past, which is surprisingly like suddenly staring into a camera in reverse. For example, this gem: 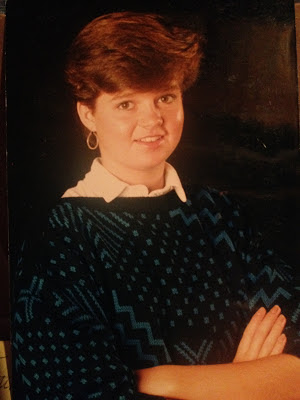 HolyMotherofSweetJesusFuck! Note: the haircut that was supposed to resemble a photo of Famke Janssen that I tore out of a magazine and how it accentuates my most-decidedly non-Danish bone structure, the electric blue Space Invaders-meets-Bill Cosby sweater, the or-just-look-like-one Barbizon pose with arms crossed all cool-like, because nothing says nonchalance like standing like that.

It was 1986, the summer before 9th grade on a trip to North Carolina to visit family. My uncle had taken up photography so he took my picture, and the thing of it is, I remember feeling beautiful that day. In front of the camera in that horrible sweater with my bloated awful 13 year old face and puffy hair I remember thinking maybe I was a Danish Supermodel who just so happened to be having a modeling session photographed by her uncle in the basement of a tract home in North Carolina. Surely this happens.

I don't know why I am posting this, the ugliest photo of me ever taken...partly because it's funny, yes. Look how brave I am, posting this picture! I made it to the other side of that round face. But also because maybe there is something beautiful in the fact that I felt pretty then when I was really very not, when there was no reverse function on the camera and how I felt was dictated only by who I was in my head.

I LOVE IT! LOL I had similar hair, similar clothes, and am nodding my head in agreement about the self-pics on the phone- OMG- how UGY AM I (I think to myself when this happens! LOL)

my favorite and my best- MFAMB to you said...

i had that same cut. only it was called the dorothy hamill. famke jansen classes that shit up right.
also your face might be the roundest ever. but also the cutest. for a lesbian in a cosby sweater.

i am going to find the picture i am referring to. i am wearing a yellow sweatshirt with my name embroidered across the front. frosted lipstick and a doofy smile.

Love it!
And "lesbian in a cowboy sweater"!
Thanks for the morning laugh!

OMG... You have had me smiling and laughing... I have similar pictures... trust me you look much better than I did!
AND as for that reverse function on the phone... Kill it is all I can say... :)
Great post... xv

Do you think you look Danish in this photo? xo
- Vinnie

I would say I suffer from this predicament often, but clearly I am not suffering. I seem to have reverse body dysmorphic disorder; the opposite of the women that are thin that think they are fat. I get ready in the morning and think I look good. I like my outfit, hair is nice, body looking mediocre but acceptable. Then I see a freaking pic of myself and I am all "hey, who's the chubby chick holding my toddler and somebody get her a hot oil treatment and teeth whitener!" And then I realize it's me and vow to never ever be photographed again.