I am never again going to have a first kiss. At least I hope not, because I love Bryan and our life together and I don't want anyone else. Though I'd be lying if I didn't say that the thought of never having a first kiss again didn't make me pause. The uncertainty, the butterflies...(but let's be real. I've been with Bryan since we were teenagers. Do adults get nervous kissing someone for the first time? Clammy? Clumsy? I hope so, for everyone's sake.)

My very first kiss was with a boy who had blubbery lips. I wrote it about it eons ago, but it was one of the Petunia-faced posts long-lost in The Great Google Account Deletion Doh! of 2008, so I will recap it quickly for you: 7th grade, 7 Minutes in the Closet. I went to my first boy-girl party and what I remember most is that some girl got her period on the white couch and the boys all laughed while the girls laughed harder. Karma, karma, karma, karma, karma Chameleon, we come and go, we come and go-ooo...someone suggested a rollicking game of 7 Minutes in the Closet even though I was pretty sure it was supposed to be 3 minutes, so I feigned boredom and ate pizza. At the time I was "going" with a boy named NotBob (in that his name was totally NOT Bob but in this age of wwwEveryone'sBusiness I don't want him to find this). Honestly, I had no idea what "going" meant, but I was 12 and just wanted somewhere to go. I was a cool, modern (read: terrified, stupid) 7th grade girlfriend, so I "let" NotBob disappear into the closet with lots of girls that night as I tried to pull off a sophisticated apathy. Of course I was 12, so after an hour or so I relented and let someone push me into the closet with NotBob. In the dark, he reeked of Cheetos and the closet smelled like wool. And then his mouth: wet, too big, tongue, and all I could think was this is it???

My first kiss sucked, as I imagine most do, but my second kiss was with Bryan, yes, Bryan of the til death do we part Bryan. This time I was in the 8th grade. He kissed me up against a chain link fence, me leaning low against it because I was taller than he was. I was wearing his trench coat with the Madness iron-ons and Sharpie drawing of The Specials, and I remember thinking, yes this. is. it.

(Sometimes in my revisionist history I erase NotBob and pretend that Bryan was my first kiss, my first everything, all fireworks and Marcia Brady with Davey Jones if Davey Jones had married Marcia and they had two kids and drove Toyotas. Let's play that game, shall we?)

It wasn't until 22 years later that I had my second first kiss, the exact nomenclature a little awkward. This time it was with Zoey, sweet 17 month old Zoey who clasped my face and kissed me, mama, the best kisser of them all. (Apologies to my husband and NotBob who we agree to agree never happened, yes?)

And now this: Ozzy. My last first kiss, since I am not having more kids and don't want anyone other. Ozzy. He has taken to coming at me with his mouth open, a strategy I hope he works on later in life, but for now--wow. Hot-breathed Ozzy. He kisses me with wild abandon and laughter, pushes his fingers into my mouth to inspect my teeth, puts his face up to mine so that I can taste the joke. With him it is all funny, the way he kisses me as though it is a punchline, an abstraction, guess you had to be there even though I am there, something just between us. My last first kiss, and I am sad.

This is it. Yes. Oh, I know they will still kiss me. I have years left of smooches, comfort, quick kisses hello and goodbye, but this is the last of my firsts. And the beginning of theirs. 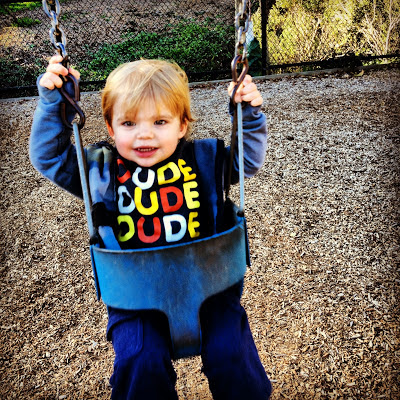 Grandchildren = more first kisses. My three aren't even all in double digits, but I already think that my baby itch will be scratched again when I have grandchildren. Is that weird? I sometimes daydream how I'll be when I'm grandma, though I also really really hope it isn't too soon either!

And, wow, I love how you describe your son's kisses---perfection!

I think I love you! One of my blogfriends linked to you–I forget who–and all of the posts I've read so far have been me. I hate how mean society is. I had a mom with cancer that I joked about. I'm so obsessed with first kisses that my best friend and I made a scrapbook to chronicle all of the boys we've kissed. And now I'm off to read more.