7 Snapshots of the Memorial Service

1.
It is not really real until I get there, although I love the smell of real cold. In the morning it begins to snow and I sit at the foot of my cousin Tess's bed and advise her to draw penises in the margins of her eulogy so she doesn't break down. I can't stop looking out the window at the snow falling and think that this is the first time in a long time that I see Tess and there are no photo booths with props, the last decade filled with weddings.

2.
At the church I want to take pictures, it is so beautiful, but I don't want to be disrespectful. Instead I crack jokes with my brilliant cousin Oliver because the family is told to gather in The Pusey Room before and after the service, named after a former president and benefactor of Harvard. Everyone cries in The Pusey Room, we whisper to each other, it all begins and ends in The Pusey Room, twirling myself around to read the gold inlaid quote about education, my head spinning with the infinite possibilities of the name.


3.
The organist plays fugues, Wagner, people read Mary Oliver and speak. At the end there are military honors, a 3 gun salute; I am stunned by how powerful it is. The exact way the impossibly young marines turn on their heels, fold the flag...how the marine on the far left fumbles with the corner for a few minutes and I feel bad for him...turning the corners in and in again. And then a marine from outside marches in to slip the shell casings inside the tight triangle of flag, a slow, measured, heavy salute, and we are all sobbing.


4.
The reception is held at The Harvard Museum of Natural History. I wonder if it is too late for me to do something extraordinary enough that people will gather there to remember me. Probably, though I wonder if maybe just having a few stuffed tigers at my memorial would suffice. I guesstimate that the average IQ of the crowd is 135.


5.
There are boards with photos, and I fall in love with this one of a paleontological dig at a Crow Indian reservation in the 70's. There is my dad in the back with the rifle, my uncle seated in the front, on the far left my step-dad is holding a machete. I know I will never be as cool as these men. 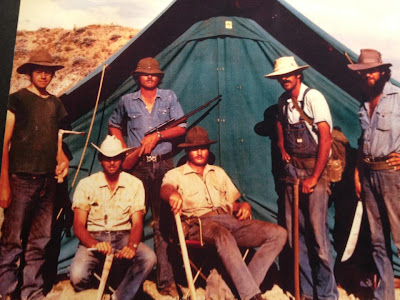 6.
Later, my dad tells us stories. The time he was jailed for murder in Africa (didn't do it), took acid on ice floes in Greenland, how when he was 15 and my uncle 18 they drove cross country in my uncle's Jaguar and camped on the very edge of the Grand Canyon because you could do that in 1957 at 15 years old, I guess. How they met some leathery traveler and spent the night smoking Lucky Strikes and listening to the man's stories, how in the morning they woke up to find a carved stick stabbed into the dirt with a note attached that just said Adios Amigos, John. They took the stick and named it the Amigo John Stick, gave it to their younger brother Andy who later died at 40.

My dad finds the Amigo John Stick in my uncle's study and takes it home with him.


7.
On the flight home the woman next to me chews gum with her mouth open for 6 hours straight. 6 hours straight of it sounding as if someone is eating a banana in my ear, and I think about how strange it is that I am not able to tell her to please close her mouth but totally able to punch her in the face. Instead I swipe my card to buy Direct TV, put on headphones and watch Real Housewives of Atlanta all the way home.

Wow - how perfectly you describe grief and powerful memories (impressions). I feel as though I was there - or knew him - so affected by the experience......

Peace be with your uncle, your family.

They just are so kick ass, I was born in the wrong era this I know.

Thanks for a beautiful piece. I love the appreciative details, the recounting of incongruous feelings, etc.

Thanks Susannah. I am sorry it took a sad occasion to write so beautifully. Welcome home.

That picture should be on your wall, front and center! I loved this post. Can't wait for you to write a memoir with all your brilliant stories! Love the way you write. Your Uncle would be so proud of the way you have honored him!

beautiful, as always. thanks. donna

exterior veneer said...
This comment has been removed by a blog administrator.
December 14, 2012 at 5:24 AM