A few months ago I talked Zoey off the ledge of an Addams Family-themed birthday party. I just couldn't wrap my head around a bunch of 6 year olds moshing to the music of The Cramps, so I steered her a bit more toward Gary Glitter and we settled on A Very Fairy Birthday Party. Done and done.

First things first, we set up a fairy crown making station. Easy peasy me-so-pleasey, I bought wire floral garlands, butterflies and faux cherry blossoms, then cut and molded the garlands into halos and snipped the flowers into 1" blooms beforehand. Then I set out the blooms and butterflies in terracotta pots along with some pre-cut wire, along with the deer from Zoey's room just because. 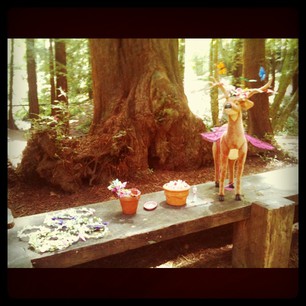 Here's Zoey showing her friends what to do, with my friend Rosalie photobombing through a pair of tinsel wings. 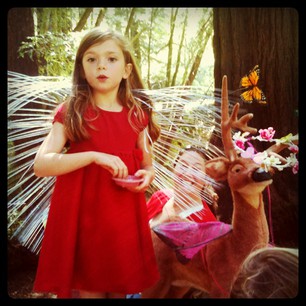 The resulting fairy crowns made my inner 6 year old burn with jealousy. I totally would've tossed a kitten if I hadn't already made myself one at home. p.s. "toss a kitten" is my new go-to phrase for throw a conniption. It's all kinds of marvelous. 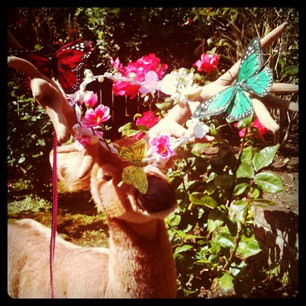 The girls then started decorating sticks they found to make fairy wands, and once again my head nearly fell off with the sheer creativity of kids. 6 years olds are simply Gen. I. Us. 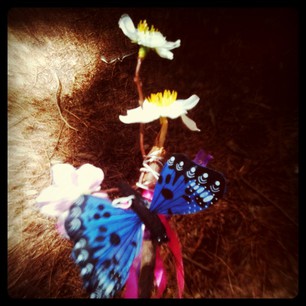 I love this shot, like a few fairies copped a squat to chit chat. 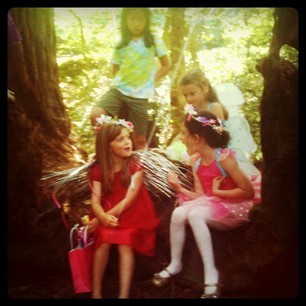 Once? When I was 6ish, I made my family a cake and put the whole egg in, shell and all, and for some reason my family likes to tell this story whenever I bake. Incidentally, I had a made-up restaurant when I was little called Zuzu's. The only thing on my menu was grilled cheese which my mom actually made, but I bring it up only because I was thinking the other day how strangely close the name Zuzu's is to Zoey and Ozzy. Clearly my penchant for z's began at an early age. All that to say I made cupcakes and decorated them with butterflies so no one would suspect they were Duncan Hines. 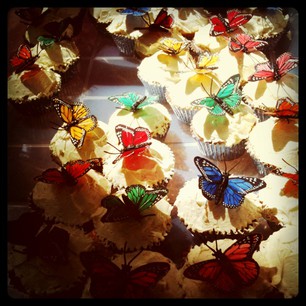 Mandatory photo of the birthday girl blowing out her candle: 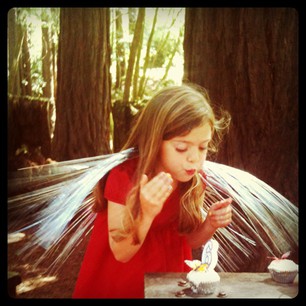 It didn't hurt that we had the party in an actual fairy ring, a grove of old growth redwoods in a perfect circle. Something about the center redwood either rotting out or burning down a thousand years ago, then a bunch of shoots grew in a perfect circle. Either that or magic, hard to say. 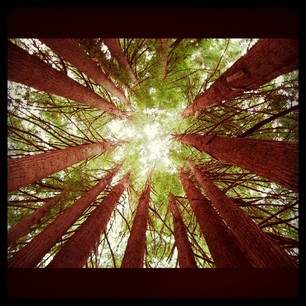 In case you've ever wondered what a gang of fairies looks like, it's pretty menacing... 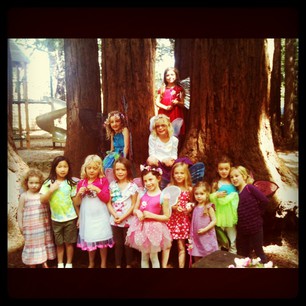 This pic pretty much sums up the day, though. Lots of shrieking, which is the way one should start year 6. 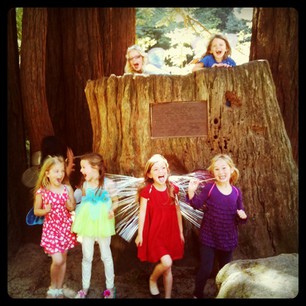 Gratuitous shot of the party favors. Zoey and I made each girl a fairy terrarium complete with fairy, moss, cherry blossoms and plenty of pixie dust. Special shout out to the few days I spent on Pinterest before I lost...interest. What? I just pin shit--cute dresses and rings, shoes, art--and nothing shows up at my door in 5 to 7 business days? Hmph. 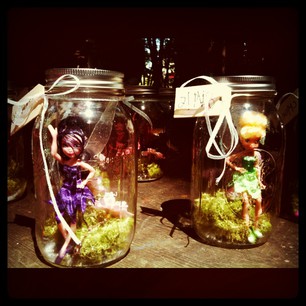 And just because I have noticed the slippery slope slide this blog has been taking with regards to a certain someone's second child syndrome, here's a shot of Ozzy, wingless and glitter-free but somehow just as magical. 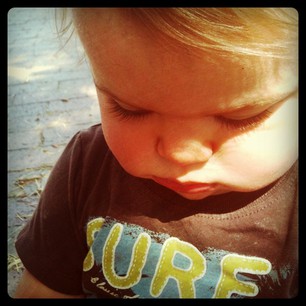 Don't worry, little man. We're staring down the barrel of 1, t-minus 30 days and counting. Pretty sure your dad's already noodling on a Dukes of Hazzard-theme...

You always have the best party themes. And that circle of redwoods? Magic. It has to be.

also kind of wish i was have a very fairy birthday party for myself today... still time to make myself a fairy crown i suppose ;)

WOW! This is possibly my dream birthday party... Would you like to adopt me and trow me a "3-6" one next year? Please pretty Please!

Looks like all the fairies had a wonderful time, specially Zoey, Happy Birthday!!!

Zazu's is a restaurant here in Sonoma County. Very well regarded. Are you sure you didn't tell someone? Your ideas always seem to catch on.

we went to a dukes of hazzard 40th birthday last year--highly recommend. beer in mason jars and crawfish. i wore a square dance dress as you won't catch me in a pair of daisy dukes.

Adorable - I love the fairy jars. My 2 year old twins had a Terrible Twos punk rock party last weekend complete with Rancid and temporary tattoos. What was I thinking?

Re: Kate's comment above. Susannah, you did say you had some spare mason jars leftover from the fairy terrariums. Just sayin'.

Wow! What an amazing idea for a 6 year old birthday party! It will be hard to top! Amazing photos and location - I absolutely love it. Would it be weird if I did the same for my 30th birthday party this year?