I was thinking today of jelly beans, of a certain creek a few streets from where I grew up. I was thinking of Reagan and how he liked jelly beans, how I thought it mandatory for a president to endorse a food group. Carter with his peanuts and Reagan with jelly beans, each of those an actual food group to me at 10, how I knew then that I could never be president because I did not have a signature food much less a group or a political party. I'm guessing I was 10, because it was a year of rainbows and alligator shoelaces, the year of jelly beans. For my birthday my mom had bought necklaces as party favors, gold chains with a row of plastic jelly beans that hung down, red, orange, yellow, green, blue, in a rainbow like that. I don't remember anything about the party or what I got, just those cheap plastic jelly bean necklaces and how much I loved mine, how the jelly beans felt in my mouth when I pulled the necklace into my lips, the dull tink of plastic and teeth. How one day walking home from somewhere I stopped at the chainlink fence over the creek to see how far the water had risen and when I got home it was gone. 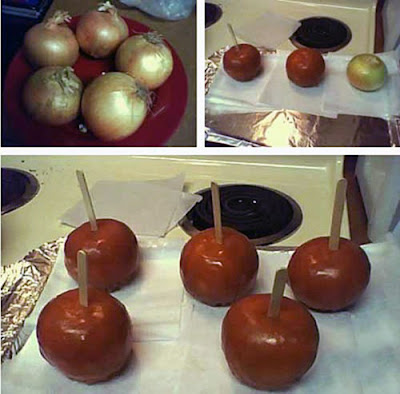 Later, or maybe it was before, a neighbor said that her brother had found a dead teenage girl in that creek. She had slit her wrists, and though I did not see the girl's body I saw slick leaves stuck to white skin. The romance of something horrible that was far enough away that I only thought of my necklace whenever I passed the creek, how for years I peered over the railing to see if I could spot the rainbow I had lost.

Incidentally, in high school I kissed a boy who ate Very Cherry Jelly Bellies and then blew them out his nose on demand. He had pretty green eyes despite his soft palate being too closely connected, so once after he gave me a ride home we kissed not because we liked each other because we didn't, but because we were two teenagers in a car and I was getting out.

I wish I still had that rainbow jelly bean necklace, and somewhere somebody wishes that dead teenage girl were still alive.

Absolutely beautiful. This is a chapter in your book, right? I'm obsessed with coming of age novels - Michael Chabon has to be the master. I'm waiting for yours.... ;)
xo

It's always interesting to peer inside your wonderful mind.

I've always favored audio books over print, because I have attention issues and my mind drifts. Many times, I read the same paragraph over-and-over, yet I have no idea what I'm reading. It doesn't stick.

Or, I may start reading and things seem okay. Without realizing it, I then get distracted by the classical music playing softly in the background. As my left brain continues reading, my right brain puts-on the turn signal and takes the first available exit.

Is that Strauss? It sounds like Strauss. I love his waltzes. Learning to waltz would be awesome. Vienna would be a cool place to visit, too. Isn't that where The Sound of Music was filmed? Man, Julie Andrews. She was a babe. Those mountains in the opening of the film are magnificent. Maybe that was Switzerland? I should travel more. Well, I should travel. Life really is short. I’m already in my early 40s—what am I waiting for? There are so many places I want to visit. Going to Antarctica would be a once-in-a-lifetime trip. I could go ice climbing and also see some penguins. Or, maybe the Arctic? I could go to that city above the Arctic Circle where all those Russian nuclear subs are being decommissioned. Where did I see that? Oh, yeah, that Discovery Channel show on Netflix. I have too many movies in my Netflix Instant queue. I should just delete them all and start-over…

I never have this problem with your blog, Susannah. You’re a gifted writer. I don’t know if it’s easy, but you sure make it look so. I envy your talent.

Oh Anonymous Mr. X~
Thank you.
Let me start again. Yesterday I got a comment from Anonymous that was mean. Not just mean to me, but mean to my kids. I killed that person two hundred times in the five minutes that followed, all without getting out of my chair. And then I decided not to publish the comment and walked away. Bigger people, bigger fish, but still it made me feel so small. So when I saw another comment tonight from Anonymous my heart sank. I gave myself a little pep talk before I opened the comment, but when I did there you were.
You will never know how much your comment means to me.
So I end with where I started--thank you.
And it sounds as if you're something of a writer, too. :)

There's a great phrase I try to remember when life gets heavy:

"Nothing real can harm me and nothing unreal exists."

This is a paraphrase of the original quote, but I like it better. (Thanks, Wayne Dyer.)

I'm sorry for the unkind remarks you received from the other "Anonymous." I remain an admirer of your work and wish only the best for you and your lovely family.

Finally, I am something of a closet writer. Your acknowledgement of this is a compliment I cherish greatly. Thank YOU!

p.s. I hope Zoey enjoyed the Frank Sinatra songs I e-mailed to you. :) Now, you know my not-so-secret identity.

What a great quote! Writing it down right now. And Zoey loved the Sinatra songs (as did I). Lately we've been on a Stones kick with Wild Horses and Waiting on a Friend.

I think everyone needs a Mr. X in their life. :)

Molly, that is eerie how much the photo looks like Zoey. Actually, it looks more like me when I was a kid because Zoey's eyes are lighter. Eek!

I STILL have the same jelly bean necklace...