There exists an optical phenomenon known as The Green Flash. Ever seen it? Pas moi, but I’ve been told it occurs right before sunrise or sunset, a momentary refraction of light that moves slower in the lower, denser air than in the thinner air above, enhanced by mirage and probably myth. Tssssss. (I’ve also heard the flash is accompanied by a hiss as the sun hits the water, but honestly I think I got this info from The Blue Lagoon and do not always trust the science of Christopher Atkins.)

What is not so widely known is that there exists another, lesser known Green Flash, a moment of pregnant phenomenon when I raise my head from the nausea and actually look cute. Oh, it’s brief, this moment, a flash of glow before I sink into the bloat of latter pregnancy, my eyes suddenly smaller, my breathing almost an embarrassment. I so wanted to catch this elusive Green Flash but I must have blinked, because the other day I looked down and noticed the tell-tale swell of an ankle. Quick! I turned to Bryan—take a picture of me! But it was too late, so I leave you with this: the sight of a pregnant lady sinking into her 21st week (if you really concentrate you can hear the hiss). 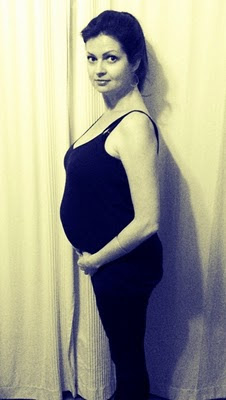 More than halfway there, people.

hooray! i know that every day, week and month counts.

You're beautiful, my friend! Why is it so much harder for some people to be pregnant than others? It's just not fair! you're on the downhill slide!

To me you look wonderful and healthy!

SOOOOOOOOOOO very happy for you! You look great and I hope from here on out that this pregnancy and birth are effortless and you feel great. Rest all that you can...cause you're gonna need it girl. Things definitely change with two, but I know you will embrace it with ease.

I saw a green flash once at sunset off the Big Island. Really. I think you are always cute, so not sure if that's a perpetual green flash or not.
Keli is about ready to "pop"!

Don't worry. I learned my lesson the first time. There will be no comments on noisy breathing coming from me...Baby making Bellies are Beautiful!

I'm a (non-pregnant) loud breather lately when I exert myself. Like by walking up the stairs. Or making my bed when I'm on the phone.

Love you guys. I'm going to read these comments every morning after I've tried on and tossed down yet another outfit I've grown out of. :)

p.s. I've never had a butt. If anything, it goes in. Sessssy!

Looking hot mama! For serious.
My 2nd baby stole my butt, I miss it.
And I miss being pregnant.
Enjoy!!

Thank you for the extremely impressive article. It has great detail that are easy to understand and it also has great tips. I can't wait to read more of your blogs.

you're so freaking cute, i want to HUG you!!! xoxo

I think you look pretty.

This is the first time I have visited your site and I'm coming from Jules.
Can I just say that you are darling.

And congrats on the impending bundle!