What Is the Opposite of Stoic? 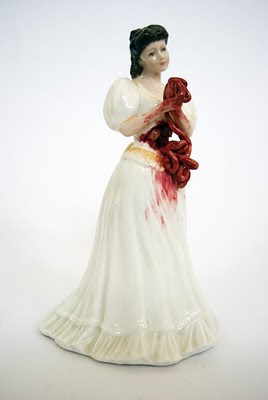 The opposite of stoic is waking up to pee at 1am and seeing the red of blood dark in the moonlight because everyone knows that blood between the hours of midnight and 5am is automatically multiplied and then squared by the mind of a pregnant woman who wipes once and then twice. Because really? Was that really? And then she wipes again hoping to see white nothing and sleep but there is more and she is awake and cannot feel her hands. No. No, no, no, no. I'm bleeding, she says, and like anything said in the middle of the night the words are too loud.

(Me.) I called the 24 hour ob/gyn line only to get a nurse who thought I was saying I had been to CVS the pharmacy that day--what other CVS is there? No, I said, it's a procedure, a test, and now I'm bleeding, bright red blood, to which she told me that spotting is normal throughout pregnancy. I wanted to kill her, I did, and it was only later today, at 1pm actually, that I spoke to my mother who told me that my grandfather who was an ob/gyn used to ask his patients if the blood could fill a shoe. And now I miss my grandfather who told stories that were too long and had a boat named the Sea-Section because the blood could not fill a shoe, would have probably only slicked the surface of a flip flop really, and now it is brown, light and I am sleepy.

I am okay for now. We are okay. Which is the opposite of stoic, I think, the automatic addition of for now.

Oh so scary. I would have seriously gone off on that nurse...could she have been less helpful? Hope you and baby are ok...

It is physically impossible to be stoic and pregnant at the same time. Also unnecessary. Pregnancy is the perfect excuse to be a lunatic. Hope all is well.

Totally scary. Any blood at all scares a pregnant woman. So glad you both are okay. And I agree with AppleTree...pregnancy is one hundred percent the perfect excuse to be a lunatic. One reason I miss being pregnant. ;-)

You're OK, right?!
Less than helpful nurses on the other end of the phone make me crazy.

You have YOUR family. And your FAMILY. And then, this blog family. I know we are ALL thinking good thoughts, hoping good hopes, and praying our best prayers for you. Feel whatever you feel for the next several months. You don't ever have to feel stoic, but I hope you'll feel some strength from all of us.

omg how scary. take it easy!!

that RN needs to be fired. Really? come on

I am SO glad that you're O.K. Given the approach they took for the CVS, it seems inevitable to me that you would have some bright, red blood and cramping. The obscenity here is that mis-named Advice Nurse. She needs to have her B-Jay-Jay sewn closed, her lights punched out, her humanity-rating dropped to a negative and her license pulled...and, Yes, I am volunteering.
What memories you bring back talking about GrandDaddy Doctor. For all his faults-and there were plenty, he was an irreplacable comfort at those times when I needed, not just the voice of someone who loved me, but also of someone with some credentials I trusted. I had a 24/7 hotline going to him during both pregnancies and he was a lifesaver. What is it about blood and genitals and nights that so lace us in fear? I remember the night I went to pee, felt like I was voiding razor blades-which wasn't the bad thing since I had already gone through a UTI or two. It was when I wiped and looked into the toilet to see it filled with blood and clots that freaked me out. Even though it was 4a my Dad's time, a team of wild horses wouldn't have gotten the phone from my trembling hand. "Oh, you just have a Hemorrhagic Cystitis....same as any other bladder infection except that a little blood vessel on the inflammed bladder lining ruptured. Nothing to worry about...it only takes a teaspoon of blood in the toilet to make it look like it's all blood....drink a lot...." and I was fine. This was one of the nights I remember when we talked about blood...how it all changes when it's your own...when it's from the vagina when it isn't supposed to be there....how a very little blood looks like a hemmorhage and even how blood at night is always worse. I miss him but I often hear in my head what he would say and I am comforted...or able to comfort others. But I did inherit the Paternal Brevity Disorder.
Loving You,
Mom

EFF. This scares me, but I know you have totally got this.

OH SUSANNAH...
I missed the post about the procedure and I'm playing catch up. So sorry you had to go through all of this and I pray that all is well and will be well. I feel for you and know how frightening all of it, pregnancy and motherhood and terrible 3's and teenage-like five's...it's all perfectly good reason for lunatic behavior. It will not end...the worrying, the worse case scenarios, the gut wrenching love...all of it, is here to stay. Thinking of you and hope that you are ok.

So, you know that as a blogger with a following who loves you, and a post with a figurine with bloody.. what are those.. entrails? ORGANS, anyway.. as your last entry, you have a RESPONSIBILITY to post an update. Even if it's an 'I'm alive' update. Or just '.'I know I can speak for many of us when I say that I have been checking back FREQUENTLY since Tuesday and am getting more and more nervous since you haven't posted.