I'm feeling a little shame-faced here. And not just because I farted at the beach yesterday and blamed it on my daughter. (Erin--if you're reading this--it was me. Bryan said it was totally obvious and that I should only be embarrassed that I blamed it on Zoey and we actually got in a fight about it last night because he wouldn't stop laughing so I yelled at him and wouldn't kiss him goodnight or anything else because farting in front of your friends is not funny even if it is funny and husbands should totally have your back in denying things that go beep at the beach. Done. Let us never speak of this again.)

Okay, the other thing that's making me a little sheepish is my recent fixation on getting a hairless cat. Which is not a coy way of saying I'm getting a Brazilian wax which, strangely, in our culture is nothing to be ashamed of. No, I actually really want a cat that is hairless. Like this. TELL ME THIS IS NOT THE CUTEST THING EVER. 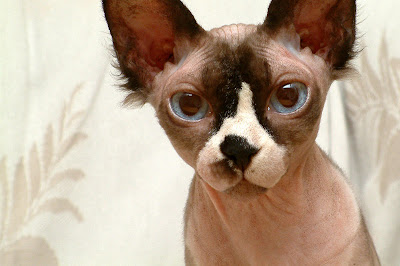 Or this. I think this one's a kitten. 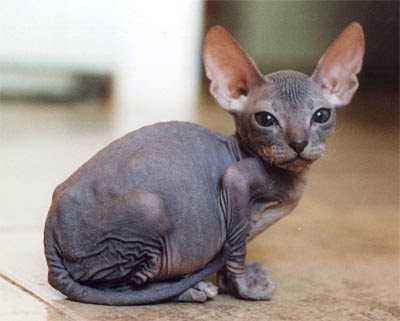 I want to kiss it and hold it and squeeze it and get all Lenny on that sack of two eyes and two ears. Of course there are a few minor things holding me back from becoming the owner of a hairless cat, aka becoming totally batshit crazy, such as the fact that they cost a few thousand bucks. And Nacho. Plus, I'm not sure if hairless cats are supposed to go outside without sunblock and I will never, ever have a litter box again. Also on the list of things I am ignoring in this fantasy in which I am the owner of a hairless cat (which is sometimes named Paco in my fantasy, other times Captain) is the fact that supposedly they secrete oils which requires regular bathing and generally I try to steer clear of the word 'secrete.' Also, I would absolutely have to do something with the pointy end of the tail. As it is it looks a little too rodent-y so I'm thinking a nice cotton ball would do nicely there at the end, yes? 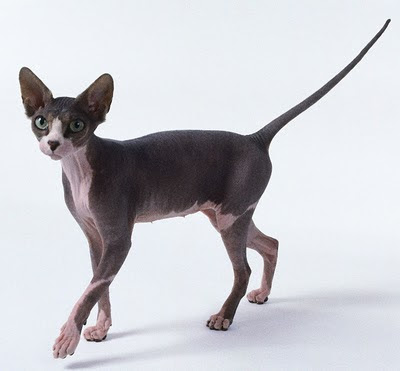 I don't know, you guys, I think they're all kinds of awesome, not to mention that their skin is like suede and is supposed to feel like a very warm peach. (All my life I've been looking for a very warm peach to call my own.) They're silly, playful, very outgoing and cuddly, and in the winter I could make mine wear costumes! Like this! 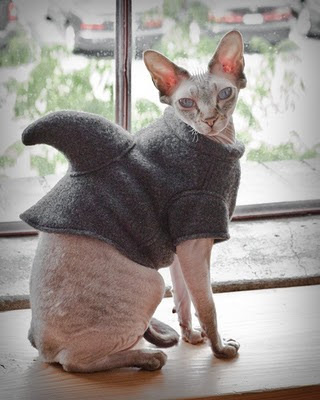 Or this! Not so much for warmth, here, but seriously. How could life ever be bad when you have one of these to play with? (Which reminds me: I would get a girl because I would not ever want to see even a hint of ball.) 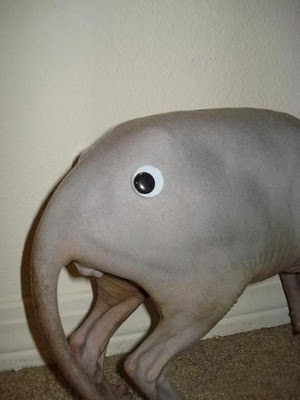 What say you? Have I lost it? Are these cats not the cutest and have you ever farted in front of your friends and blamed it on the nearest 4 year old?

Hmmm...I'm torn here between hell yeah, get the cat and put googly eyes on it's ass and saying are you out of your ever loving mind. Sure it's great to have a cat that you can glue stuff to it's ass, but those things scare me!

I say get it just for the pure entertainment factor alone. And I want to hear stories about you bathing that thing.

Those poor skin cats always get such a bad rap - I think it's nice to see someone rooting for them. But paying that much for animal when there are plenty to be rescued for free? And one that "secretes oil" nonetheless? Gross, says I.

Farting in front of your friends on the other hand. Meh, we're all human. But I usually just pretend nothing happened, hope maybe they'll think their mind is playing tricks on them, and this is no better.

Oh Cuz...I think you have lost it. Furless cats? Ew.

However I think blaming zooey for a fart is perfectly okay (oh wait, she can talk and think for herself now) maybe not so okay, but I would have done it. Next time, you can blame it on me.

That just might have been the funniest thing I've ever read in my life. secrete. heehee. hint of ball. heehee. cotton ball on the pointy tail! OMG! Too awesome. BTW, I wonder now what a baldy-cat fart smells like. No fur buffer there.

get the cat.
and then blame your gas on her.

My husband's "aunts" live in San Francisco, not to far from you, actually. Trust me. There are plenty of warm peaches to call your own without having to pay for it.

NO, categorically, NO....those are NOT the cutest things I have ever seen. They are awful...not even the excuse that they are some sort of genetic freaks eased my discomfort, oh no, they BREED them to look like that...on purpose...and charge a fortune. Variation on the genetic manipulations like the whatever kind of cats that walk around on legs that are about 2 inches tall with a regular full-sized body atop. Just ugly and cruel and, I am sure, very fragile due to the designer breeding. But then again, you guys never liked Standard Poodles either (not that I ever let Farley or Tucker get any weird topiary poodle cuts) and I wouldn't want any other kind of dog. To be fair, Standards ARE a breed, quite an old breed and not some new novelty dog.So, if you love them and got one, I'm sure I'd warm up to it.
And a public fart...all's fair...anyone who can't out you is fair game for blame. Our family never did get with the farts and burps...Hell, we don't even secrete out loud or in public!
Love You But Not Those Cats-But Still Love You Even If You Do Love Them,
Mom

Thanks for making me laugh out loud. Really.

Hairless cats in costume are super funny, and I always blame my farts on my four-year-old and sadly vice versa. She's no dummy.

Dude. That's really frickin' funny. I remember the fart, and Bryan and you sort of acting shady about it, so for a second I thought Bryan was the farter. But Zoey didn't deny, so I didn't question. I never suspected you. Well played, Family M, well played.

By their very nature, aren't all farts shady?

p.s. If you thought it was Bryan, then yes, it was Bryan. Totally Bryan. I was just covering for him--yeah, that's the ticket!

I've always been a sucker for the underdog--or cat--practically inviting the local homeless men over for a sleepover/shower and falling in love with anything straight out of a Diane Arbus photograph. . .BUT. . .I cannot make myself look these cats in the eye without pulling the covers up over my head and repeating over and over, "There's no place like home." They look like they've been tossed into a cauldron filled with boiling water, singed beyond repair. My instinct? To call Animal Protective Services STAT!!!!

And yet, who am I to tell you what you can or cannot adore? Good for you if you can love THAT.

I LOVE these cats! They are the only ones I can own - I'm allergic to all the hairy ones. and yes....on Saturday at the ice cream shop. blamed it on Sarah(4) who was flirting with the nice police officers. I pointed at her & she got the worst case of the giggles I've ever seen. It was very funny!

i think that they leave 'soiled stains' on things. The body oil, or something. Also, I hear they smell funky.

I did cat sit for one of these type of cats once and I must say- they are very homely but they feel wonderful- kind of suedey with a built in heater- they radiate heat- no kidding. Never saw any weird oliy secretions or heard any farts either :) so funny this post- made me laugh so much I farted:) and blamed it on my cat!

OMG ME TOO ME TOO! I have been obsessed with hairless cats for forever. I think they are ADORABLE! My husband is firmly against the idea, though. If I didn't, you know, love him and stuff, I'm not sure I would have married him on the anti-hairless-cat-stance alone.