Zoey has just started drawing pictures. (Before it was all chicken scratch and perfectly cut out construction paper jellyfish on which she may or may not have maybe glued some eyes before the teacher signed her name all perfect-like at the corner of the page.) But now we are really going somewhere: she likes to draw roads, lining up pieces of paper across the floor on which she pencils in the dotted line of a freeway. Balloons--lopsided sad little circles that float at the top of a page. The other day she sat next to me and wrote the letter S and I wanted to ball up that S and eat it I was so happy. S! Next up: faces. Monsters, perhaps. Fairies and flowers, a self-portrait of a young girl with wings that flap happy.

File this under: shit I wish I had thought of first (but I didn't, so now I will just blog about it a wee bit jealous but with tons o' respect). The Monster Engine is a concept (a book, a gallery, a lecture, a show) based on the question: what would a child's drawing look like if it were painted realistically? Here are some answers... 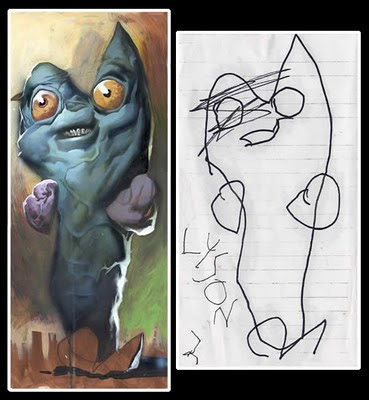 What kills me is that you know the kid sees their drawing as the realistic one, so in a way these paintings allow us to see past the one dimensional line drawing and into the imagination of a child. Do you see what I see? 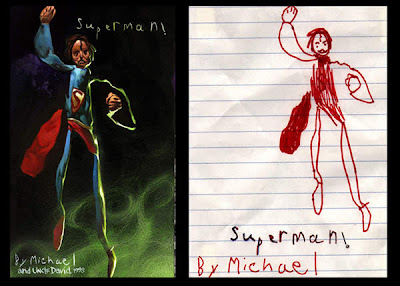 I am seriously in love with this whole thing, both the before & the after. And I cannot wait until Zoey's one way roads turn into entire towns, her floppy balloons into circuses. No more pre-fab jellyfish but shaky underwater worlds of fish that have yet to be discovered. 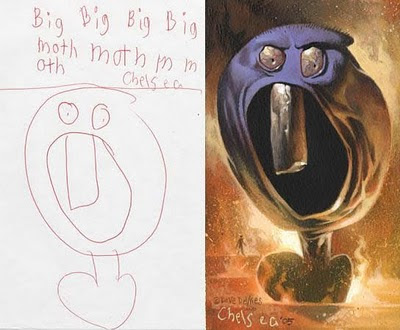 Trivia about yours truly: I was not allowed coloring books when I was little because they stifled creativity. Another tidbit: in preschool all of my artwork was black. Some brown. A bit of a goth at the age of 4, my parents became worried and thought of taking me to a child psychologist. Luckily they asked me first why I only painted in dark colors and the answer was this: I was the slowest runner at school and thus got to the easels after everyone had already taken the yellows, the reds, the blues & greens. I was goth by slow only.

I love this, you guys, really I do. These drawings & paintings (and that one lone letter S) make me want to run just a little bit faster.

Hi! Found your blog through A Blonde Ambition! I am all over it! So fun and chic! Excited to be a new reader! xo

I love this, as well. We wrote interestingly parallel blog posts today. Funny. You might enjoy this, too. The little artists among us can design their own stuffed pals:

just discovered your blog. love it!

PS who is your sexy Jose super fan here talking all spanish and shite?

Richie--I have no idea who José Ramon is, but I like him! At first I cut and pasted his comment into a translation website and it made no sense (too literal), then I asked my Spanish-speaking friend Ana to translate for me, and oh my. It is beautiful! I am seriously thinking of giving up English altogether and becoming a Spanish speaker. Of course I don't know the language, so there is that.