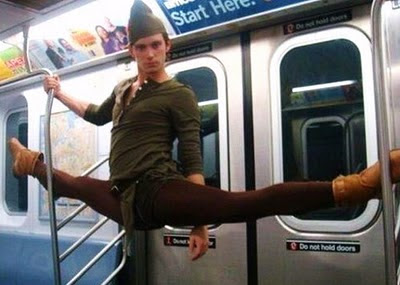 He could well be annoying as fuck in person--I mean, I would kind of expect him to be. But still, I would love to know this guy, to have him in my life somehow if for nothing else than to watch him pose on the back of my couch or across the top of my desk, staring me down with that look. That look! If anything gets me through the day it will be him.

Or this. Have you heard about this? It's old news for sure, but new to me and timeless, really. The story of Nicholas White, a man who went outside for a cigarette break while working in New York's McGraw-Hill building (it was 11pm on a Friday). On his way back, the elevator stopped, and he was trapped for 41 hours. The following is a 3 minute video of his horrifying entrapment...

Dollars to donuts you wondered if/when and how he went to the bathroom. Was it just a quick pee in the corner? A poop bundled up in his jacket? No? Just me? Okay then. Turns out he pried open the doors and pissed down the elevator shaft, hoping to catch some attention. I just don't know. I think this video is so fascinating because we've all wondered what we'd do in such a situation, eyed the woman who got on at the 4th floor wondering if maybe she keeps Certs in her purse for later. No? Just me again? Hm. Well, just so you know I usually have crayons in my purse so we can play MASH (dibs on the Lambourghini!) should we go crazy sometime around hour 34.

Happy Hump Day, people. You're probably not stuck in an elevator, but if you are, you're getting really good internet connection, so hey! There's that!

I got a little panicky just WATCHING this video...man...

i'd welcome that sprite onto my desk for sure!

That Keebler elf looks like Jacob from last season's So You Think You Can Dance! Do we know the source? (Man, I loved me some Jacob.)

I refrained from watching the video. Not in a mental place today where I can do that. lol

A muse such as this!

Wrapped the poop up in his coat!

You effing kill me!! We'd make great trapped-in-an-ellie-mates. I mean, at least we'd make each other laugh and stuff!

41 hours just so happens to be how long I was in labor for my first daughter. That's a very long time to do anything without stopping. Whoa.

Turns out you're not adopted because I thought the EXACT same things! In fact, I was obsessing over it the whole time.

oh man, I'm dry heaving just thinking about the potential of mad claustrophobia.
However, fancy splits guy would be a good distraction for a bit. Of course by hour 1.2 I'd probably just haul off and smack him.

OH SUSANNAH...
Holy Shit...how'd you know that "this...this here...little elf looking guy" is on my bucket list? I mean...not the elf looking man himself...but the splits? I "use to" be able to do them and now I'm working on it again...right this minute as a matter of fact...i'm practicing and trying to type with my toes...LOL! He sure did bring me some joy today...thanks...and there's hope I can do it again. However...it will NOT be on the subway...unless I'm feeling really amorous and if so...I will definitely have some photo it for me and send it to you! :)

that's my husband's worst nightmare. the elevator, not the elf splits.

I find myself captivated, even mesmerized by the insolent, tres limber, Blue-Steel-And Then-Some, subway riding, bugle boy. I have the strongest urge to bitch slap him knowing full well that he'd just love it. The elevator clip just made me anxious and wanting to know WHY, during those 41 grueling hours with nothing to do, he didn't smoke one cigarette? Do you suppose he was that law-abiding or just out of ciggies? If he was stuck without a cigarette and/or lighter that makes him about the unluckiest guy I've ever seen!
Love the images!
Mom

He looks like one of those draft stopper things placed on the floor in front of a closed door.........

i totally forgot about certs!