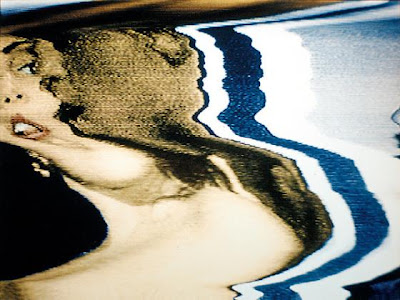 (Only sometimes we performed magic by pressing the numbers one and sixteen at the exact same time, turned the cable box off and then on and the picture was clear. Andy was the best at this, though as you can imagine it got awkward asking my brother to turn on the Playboy channel for me.)

I wished I had the kind of hair that turned green from chlorine. In bed at night I poked my fingers into my cheeks hard to make dimples.

Once upon a time the man down at Center Market taught my brother how to write his name in Arabic, but he did not teach me because I was a girl. (Once upon that same time I stole blue cream soda from the man because I could. His name was Sadat. Other than that, he was okay.)

For fun I used to walk around the house holding a mirror at my chest face up. I would hop over door headers while walking on the ceiling, my steps exaggerated upside-down. Sundays my mom hosted acupuncture at our house, people strewn about the floor with needles quivering from their necks. On these days I was not allowed to play my mirror game.

There was a large plum tree out front that dropped fruit from June until September, the front yard alive with bees. I would climb the tree with a book, hoping that the neighbors saw me through the leaves, don't know why. It hurt, it was uncomfortable, but still I love the smell of hot, rotting plums and daffodils.

When I cannot sleep now I dig through these memories, that house, rifle through the scents of Sara Lee, the sound of Randy Newman. Once upon a time things seemed so simple, the way I tingled at a moving ribbon of flesh hot pink and blue, the days yellow, when I walked on the ceiling for fun. And yet this is how I write my name in Arabic: سوزانا.

Love it and Love you! Girl...you are so VERY talented!

This is what I tell my daughter:"Life will never be as
simple as in your childhood - enjoy while you can!"
We all have these memories of a carefree childhood, it's nice to pull them out once in a while.

i. cannot. believe. this.
seriously, i thought i was the only person on the planet who did the mirror thing.
now i kinda believe in parallel universes or whatever that weird coincidence would be.

Can't stop laughing at your cats name! Childhood memories can be so beautiful and bizzare?

Pillow Mint! I can't believe you did the mirror thing, too. The things kids did before the internet...

Thank you all for your kind words, as always. Sometimes I feel like the blogosphere is a very large swimming pool and I cannot touch the bottom. Marco... Marco... And there you all are with your Polo's...

Once upon a time I didn't have a project due tomorrow morning, one that had me desperately looking for distraction and finding my way over here. This helped... I felt like I was there with you in that house! B, I still have to go write this stupid thing now.

Once upon a time life was so not complicated.

Linda@ Lime in the Coconut said...

(from a reluctant-to-admit-it blog stalker, i have no idea how i came to find your blog..)

that was positively lovely. i'm going to go to bed and think about how gorgeous my own childhood was.