There was a fat woman in front of me and a man behind me with hair like Lyle Lovett. Only it was raining so I kept kind of turning around to see if his hair still stood up, to see if maybe I could catch his eye and we could exchange a glance of what the fuck are we doing standing in line for the bus here on the sidewalk when there is a perfectly dry empty bus shelter not ten feet away? I mean, am I right Texas Bluegrass man who once wed a barefoot Julie Roberts? But he wouldn't look at me and the woman never once turned around. It was 7:13am. 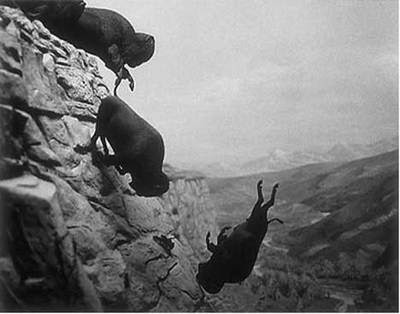 To be fair we all had umbrellas, a line of black compact nylon bat wings suspended in mid-flight commuting, the metal tips dripping splat off the ribs and onto the person behind. At 7:17 it began to hail. This was yesterday morning, and I hate myself for not moving.

But these are the rules, I tell myself. For some reason we line up along the sidewalk to wait for the bus, rain or shine in one straight line, and then we board and no one talks.

I should have said something, I think, at the very least. Like hey isn't this stupid? I should have moved beneath the shelter or told the woman her purse was getting soaked instead of standing there watching the rain drip down the back of her wide black trenchcoat. I should have turned around and kissed the man whose hair stood up even though I cannot name any of Lyle Lovett's songs and don't kiss strange men much less strange men in the morning at the bus stop. The point is: I should have done something.

But I didn't, and I probably won't tomorrow when I go to work; the weather calls for yet more rain. It's exhausting to worry about what people think of me all of the goddamn time.

Lately, I suppose, I have been feeling quiet inside, an indifferent hm of a fridge at night. There is a silence to be found in line.

This is old but beautiful nonetheless.

haven't seen that film in a while. it still makes me quietly sad, like watching the ending to Pretty in Pink and knowing that it ain't ever going to happen like that. not to me.

I have found lately that I am struggling with silence, it seems to come when I am waiting for an answer that I know will be the very one I wish it weren't.

You should have asked "Lyle" to sing.

when i clicked on your blog lyle came on (i listen to xm online). wow-freaky

What a sweet film.
The other day while waiting for my daughter to emerge from school, I stood in the normal waiting area, under my umbrella in the downpour. As other parents arrived, they stood with me, and after a few minutes without a word, we all moved en masse under the canopy by the front door.

what a great short film, I want the story to continue

what a beautiful video - i hadn't seen it before. it gave this feeling, as if it fell into my emptiness and made a splash as it hit the bottom.

also neat to see something Nasim Pedrad had done previously (she's new on SNL this season).

Oh, well, and you have to watch this:

there are like 10 of us who do this song and dance every morning. We stand there in a line down the sidewalk and don't look at each other unless the bus is late and we need to know the time. We all have matching black umbrellas. I've always wanted to take a photo of all of us in our work clothes, pretending not to see each other.

Can you direct me to the link where you found that film? I love it. Thanks!

Thank you all for your kind comments (as always). I despise the expression TGIF, but really. Thank God It's Fucking Friday. (TGIFF)

Anon--I think if you click on the film it should take you to the site. If not, it's on Vimeo. Just search "A Thousand Words." I believe the filmmaker is Tim Chung? Tom Chung? Not sure and I'm at work so I can't search for you right now :)

I love this short film. I see myself in them. Which is kind of annoying...