And Then It Was Monday--AGAIN (I Know!)

I woke up this morning feeling very much like this. 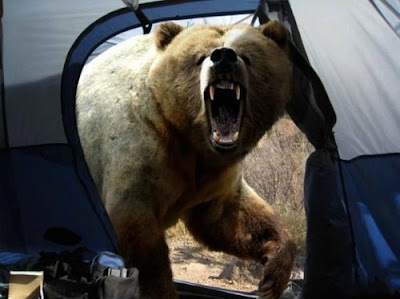 In this scenario Bryan is asleep in the tent, no pup, and I am the bear. I have three angry pimples covered in pink Mario Badescu Drying Lotion flaking off the left side of my snarling maw. I am a vision in aw fuck no.
Then there is this: 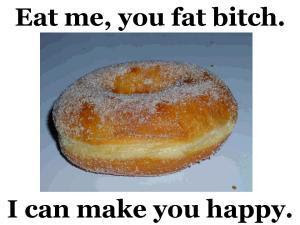 And me being me I thought that if one donut would make me happy then surely three would make me freaking ecstatic? But no, one maple and two glazed later and I am here to tell you that a breakfast of Krispy Kremes just makes you feel like a pastry bag filled with lard, a profiterole of extruded choux, a middle aged woman with zits highlighted pink and a raging case of PMS, i.e. a friggin' Cathy cartoon come to life.
Jesus Christ me, WTF? My apologies for shitting all over your Monday. Here, watch this, smile (then run. Run, I tell you! Hopefully I will be back to normal{ish} tomorrow, and that this zit cream works like it says it does).

p.s.. Get this for Debbie Downer: That first pic? Is by renowned nature photographer Michio Hoshino. Known for his pictures of bears and other wildlife, he was mauled to death by a brown bear on the Kamchatka Peninsula in eastern Russia. He was in his mid-40's and lived in Fairbanks, Alaska. This was his last picture.
DUHN duhn duuuhnnnnnnn! (Happy Monday. Did I say that yet?)

Get Erase Paste from Benefit. Then you won't care how many zits you have on any day of the week. Shit works. It's, like, magic or something. Don't question it, just amble your way over to Sephora, use your giant bear claw, and grab it. Lyla

Happy Monday, Susannah! I feel for you over the pimples and the PMS. I thought I got rid of the pimples in high school and this PMS thing sucks donkey turds.

Tomorrow is a new (and hopefully better) day!

Why don't we just change the word Monday to Shitday and be done with it?!?!

You are so funny. Thank you for this hilarious post. It made my Monday

Love you, angry bear. Thanks for the hilarious Jesus video too--what the what? awesome.

I think I could very well be that bear too. Not only am I PMS'ing, but I quit smoking a week ago too. I so wish murder was legal today. And I SWEAR my PMS gets worse the older I get...

Love the guy with the orange guitar. Sweet.

i'm never a fan of cathy and i do not appreciate it in the slightest when i read the damn comic and can relate. it makes me want to shave my head and wear a miniskirt with boots.

Ohhhh, how I wish I read this this morning when my own meltdown began. It wasn't like a five on the Richter scale or anything, but it definitely included a wide range of emotions that, unfortunately, Paul was privy to. I think it was baby's way of celebrating the start of our 3rd trimester. Can't wait to see what other tricks she has up her sleeve!

perfect timing - i've been staring down a case of krispy kremes all day - this was just what i needed to 'just say no' :) hope tuesday goes a little better!

My husband roared in my face in the middle of the night when we were camping once (probably don't have to mention that it scared the crap out of me). When I asked him WTF he was dreaming about, he said "a bear burst through the tent and bit the back of my head".

Wait a minute, did that have anything to do with the fact you had a crap Monday? Oh well....

Here's one of my old favorites:

Do you know why they call it PMS?

Because Mad Cow was already taken!

P.S. Love that video. My favorite is the big bald guy in the back who just stands there uncomfortably still.

Don't worry. As you get older it gets better..., I now have perimenopausal symptoms along with PMS. It's a whole new wonderful world. Zits and all.

I'm a day late on this comment, but it's funny you mention a maple donut. Someone brought in donuts to work today and there was one maple iced long john with a piece of cooked bacon across it. Who ever heard of such a thing?

Whoa, that bear picture is amazing. When I first opened the post I wondered immediately how in the hell someone got it and then I figured it was a fake. But holy shit. Holy shit.
Oh, and you want to talk lard bag??

does that pimple drying lotion really work?? I've read that Martha Stewart swears by it, whatever that means. oh, yes, happy monday even though it's now thursday, xo