This Weekend Neil Patrick Harris Is Going to Ride Her

Calling all Lisa Frank fans! Mariah Carey, Michael Jackson, it's all the same: rainbows and rad, glittery, flittery butterflies and unicorns galore. What is it exactly about a unicorn that gets the little girls all up in a tizzy? And please don't get all Freudian sexual subtext on me, what with the horse and the horn, because really--sometimes a cigar is just a cigar and a unicorn is just a total dickhead. 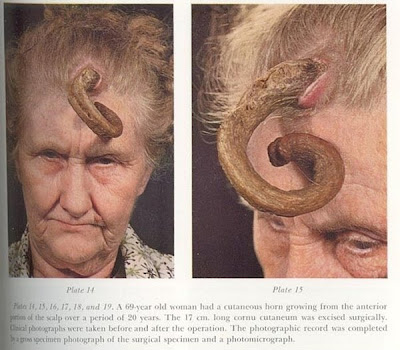 And then other times a unicorn is a 69 year old woman with a horn that looks very much like a piece of poop growing out of her head. Shockingly, this looks less magical than anything in my puffy sticker album from 1982. Apparently, this woman has had the horn growing from her head for the last 20 years, which begs the question: WTF? I mean, first of all--that wound from which the horn is growing looks like it hurts, like a nasty, painful anus in the middle of her head. That right there would send me to the doctor, like one of those under the skin zits that harbors its very own heartbeat. Get that head-anus a quick shot of cortisone, right? But then if a horn started growing out of said anus on my head? And that horn looked like a curling, hard turd, not magical at all? I mean, Jesus lady. The least you could do is smile with your eyes a little bit. Next time Zoey hurts herself and demands a unicorn sticker I am totally drawing this mythical unicoranus lady on her owie. You know, to stop the crying. In related news: SexyTime Mythical Unicoranus--I know what I'm dressing up as next Halloween.

i am completely and utterly disturbed.

how do you find these things??! What do you google up to end up with "woman growing horn from head"! You are too funny.

ummm ditto! I don't even know what to say...

I'm with benson....Where the hell do you find these things? This picture made me swear off cheese (?) for this afternoon.

um. EWWW that just made me even more nauseous than I already am.

Sorry guys. See now why I'm questionable when it comes to social skills? :)

I found this gem on Buzzfeed--click on the pic for the link.

Send stickers. I'm lightheaded and nauseous after looking at this.

I peed my pants a little. Which doesn't mean I'm not empathetic to turd-horn's plight. I am. I feel for her.

I am alternating between laughing hysterically and feeling nauseous. Just when I thought I'd seen it all...

I feel like it's time to vomit. Was there no way they could have filed that shit back a bit? Maybe given her a nice big Blossom hat with a big sunflower in the front to cover up the forehead anus? I'm grossed out, dude.

Okay I'm getting it now - you get us feeling us warm and fuzzy with posts like the one about your fab sister-in-law, rope us in like a cowgirl lasso'ing a sweet baby calf, and then do this to us.

momseyalong--you're on to me! Because tomorrow I'm whipping you all back around to instrumental music. Tomorrow is Zoey's birthday and as such there will be a sappy mommy post (no unicorns at all).

WHERE the FUCK did you FIND THIS???????? I wouldn't even know WHAT to google to find this.

im telling myself its photoshopped and never thinking about it again.

Oh sick. I saw this online a few days ago, posted by another blogger and I just KNEW you'd grab it and run.
And run you did. The description with the picture-yeah, it's a good thing I ate awhile ago.
XO
Ro

And then I REALLY freaked out my mean near-by-office-neighbor that I've been meaning to freak out for a long time... so thanks.

I think I just threw up a little in my mouth.

okay, i'm sorry. but that photo is totally freaking me out...i can't even look at it.

you had me at lisa frank and then you completely lost me at the penis/poop/horn coming out of the forhead. but i can't look away and i'm deeply scarred at the same time.

Wow. Um. Well, for the first time in quite a long time, I am...without words. Do they not have doctors in the magical land of creepy-ass turd shaped unicorn horns? Maybe you can introduce her to Chad and they could make little curly mulletted unicorns sporting red bow ties.

I am a dermatologist, and that grosses me out. She has a skin cancer at the base of that cutaneous horn (technical name for the thing). Lesson to everyone: wear your sunscreen.

eh. ugh. owe. ick. puh. my coffee literally just came back up my throat. i am deeply disturbed and can't understand why they didn't remove that before it got so big. hoping there is a good reason. i think i'm going to be haunted by this image. poor woman. ugh.

i used to design for lisa frank for about 2 years. it was like sugar-coated hell on acid.

this is so wrong. it made me laugh and shiver w/ disgust at the same time.

I'm laughing so hard it hurts. Tears running down my cheeks. Head-anus?! You are frickin hilarious.

thankyou!! i nearly peed myself!! that is hilarious!!

my 4 yr old has just begun the "u" fetish,
this puts a nasty spin on things! i won't be able to keep a straight face! Can't stop gigling!!