Remember yesterday, when I was all "Today! Today this is Zoey!" How I was all live in the moment! Stop with the cameras, the cell phones, the clockwatchers, the blogs! Well, I was. And for two full minutes there was a unicorn in my living room farting rainbows and glitter (it smelled like a mix of fig and Skittles). Zoey and I were dancing to Jack Johnson, as simple as something that nobody knows that her eyes are as big as her bubbly toes... and then Wham! Not wake me up before you go go, but wham! As in she put the boom boom into my heart because Zoey dropped the CD player directly onto her foot, no more jitterbug, no more bubbly toes, just a sudden scream that would not stop. When I was 9 years old I was making dinner with my friend and poured a pot of boiling water down my chest, resulting in third degree burns, my turtleneck melting into my skin like a bad acid trip tie-dye as I ran down the hallway in my purple corduroy knickers. Yes, knickers. Now all that remains is a very faint scar in the shape of Africa and the memory of a fashion choice that should never have been made. My brother had terrible asthma, had to be hospitalized multiple times because he was not breathing. One day he was petting our new pound dog, Max, who suddenly lunged at him and bit a chunk off his eyebrow. My mom ran out of the shower when she heard the screams, much to the confused delight of my brother's friend Ben who just stood there taking it all in: the blood running down my brother's face and the naked woman standing before him with the palm tree tattoo on her ass. Later, my brother was sitting on a concrete bus bench, just sitting, when it toppled forward, pinning him beneath and severing his Achilles tendon completely. How do parents do it? Watch their children fall and skin their knees? Listen to the sudden scream of shock? How do parents quiet the wild look in their child's eyes when they do not understand the pain? (I'm not even sure who the 'they' in that last sentence should refer to, the parents or the child. In a way, it's all the same. In the moment of pain there is no separation and it's confusing to feel, to be felt, like a phantom limb, so certain the pain is your own.) I called the advice nurse who then asked me if Zoey's foot was broken. I don't know! I said, when really I wanted to tell her I had misplaced my comic book x-ray glasses decades ago, so sorry madam medical professional. Then she asked me if there were any bones protruding from the skin, and I said no, but thank you for asking because I can totally see how a mother might navigate your automated phone system and then patiently hold for the 4 minutes wait time to speak with you while the jagged white of bone is jutting out of her child's tissue, skin and muscle. And then I got in the car and took Zoey to get an x-ray. Here she is accessorizing a Hello Kitty tiara with the lead apron compliments of radiology. 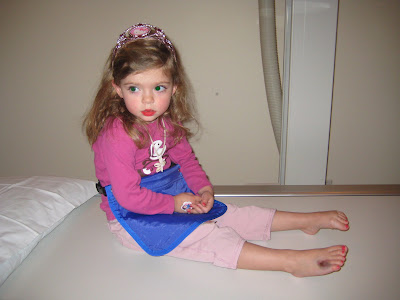 In the end, nothing was broken, except possibly me because Jesus Fucking Christ did that suck! My skeleton hurts is what Zoey kept repeating, and I held her close and felt it, too. The sudden realization that she actually has a skeleton, that her skin can be torn, that she can break, that she is real. That this is most likely the first of a few owie's. My skeleton hurts and the doctor didn't give me a unicorn sticker. Have you ever seen a not-quite three year old limp? It's pretty freaking cute, and so when we finally got home I drew on her bum foot, her very own battle wound tattoo, a unicorn snorting a fine fog of bruises, and on the backside, farting a steady stream of glittery rainbows onto her sole. 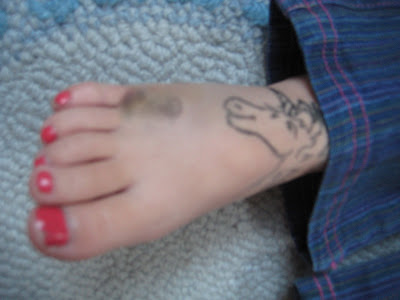 Poor bug! Just a note from one person who has a knack from dropping heavy items on her foot - it might be worth getting it checked out by a podiatrist in a few weeks. Emergency rooms often miss breaks in those tiny foot bones.

wow, put another notch in the "i'm terrified of it and not so sure i want to be a mommy" column for me on this one!

awww I hope she feels better!

Poor Zoey!!! What sucks even more is when YOU do something that hurts them, like bump their head on the car while trying to get them in their carseat, or pinching their skin while trying to unbuckle them from the carseat, or opening a heavy door in to their heads. Not that I've done any of these, I'm just saying...

that drawing of the unicorn totally rocks!! hope she feels better...i 2nd the vote to have the podiatrist check it out...xoxo

I do hope that Zoey is feeling better soon. I also hope that Zoey's Mommy's bruises heal soon as well. You're a great Mom and I feel your pain. It's amazing how our hearts are entangled with the hearts of our children. Be well soon.
BTW...love the unicorn!

Awww Poor Lil Zoey, thankfully her foot and skeleton are ok! Great job on the unicorn on her foot!

I had just read your post and cringed when I heard Zoe was hurt -for her and for you. A few hours later at the kiddie pool at the park district my little two year old slipped and took a hard fall on her arm.

I thought she broke it as it bruised right away. Thankfully a mom was nearby who happened to be a physical therapist. She helped calm my 2 year old and me, and helpd go through movement for her hand, wrist, shoulder etc.

I am still rattled even though she seems fine now. I'll keep an eye on her arm for awhile just in case! She was all of 3 feet, if that, away from me when she slipped. We try so hard to keep them safe and when they get hurt we feel we've failed them.

A speedy recovery to your precious girl and that Unicorn totally ROCKS!

Oh, little Zoey! Ouch. But come on, no one ever looked cuter or more glam getting an X-ray!

I know how you feel. Sadie's forehead is sporting one yellowish bruise, from a mishap with the corner of a coffee table last weekend and one fresh purple bruise accented with two little scratches running down the center she got while attempting to stand. I am so fine with this kid taking her sweet time to walk because once she does, I am really asking for it. I mean she is, she's asking for it, then again, to your point...I suppose I am too.
Xo
Ro

tattoos make everything better. i'm sure of it.

Your poor, sweet daughter! I hope that her foot heals well and does so quite quickly.

And MrsEm has a point. When I was a kid, I broke the growth plate in my foot, which doesn't show up well in x-rays. If she's not properly healed up in a few weeks, a podiatrist is a good route to go. Heh. My pediatric podiatrist gave out foot-shaped balloons. I can't believe I still remember that lol but I do!

As for the rest, I just don't know the answer. Here's a *hug* and I hope you feel better soon too.