How He Met My Mother: My Birthright a Long Silver Scar. Alt. Title: Give Us Your Worst.

In my continued quest to persuade family members to post for me so that I can try to write my book I bring you another snippet from my father. What he does not mention in this excerpt but I will squeal is this: he shot himself in the leg when he was in his early 20's, practicing his quick draw out of a holster, drunk. This is how he met my mother. She was a hot young nursing student and I was but a twinkle in my dad's dilated morphine-stoned eye. 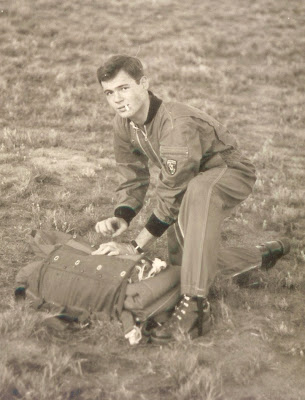 I feel your pain.
Not really.
The bullet traveled down my thigh, severed the femoral artery and lodged behind my knee. There was no pain that I can remember and bleeding to death was really quite peaceful …. until they saved my life at the hospital. …. Hours later, they took out the .45 caliber bullet …. So, what’s the problem? …. No big deal …. No pain and PLENTY of morphine …. until plenty was NOT ENOUGH as a red dragon of pain moved in.
The bullet had created a channel from my upper thigh to the back of my knee. The surgeon, a sweetly sinister Peter Lorrie, did not want the wound to scab over creating the opportunity for infection and rot from the inside. He wanted the wound to heal from the inside out. Therein lies a metaphor, I suppose.
Every other day, Peter Lorrie would open the wound on my thigh. Attaching a cotton swabbed with ointment on the end of a long steel rod, Peter Lorrie would run the steel rod and swab down the channel inside my thigh to the back of my knee. …. For a fact, this caught my complete and undivided attention. An electric searing, white-out explosion of pain collapsing The Universe and imploding The Self into NOTHING BUT PAIN. In my personal pantheon of hellacious physical hurt, I give it a 9, easy.
Okay, I know or so I hear from mothers, “You want pain, Bubba? Try having a baby.” No question about it. I can’t know, although I think we might agree that your pain is your pain, your very own that no-one can measure or feel for you.
So, what else you got. Share the pain. One of your top 10 physical hurts. Emotional pain? Oye- yoi-yoi, way too large and deep. I’m afraid to go near. Not now. Sometime later maybe.

I have 4 titanium screws in my spine and a scar that wraps around the side of my torso.

I had surgery for scolosis when I was 21, I stupidly thought that the pain meds would just carry me through the experience but what I realized soon after was that the only time I got relief from the mutilation I agreed to was the 30 min when they put the narcotics in my IV. The next 3.5 hrs till my next shot was brutal. I spent 12 days in the hospital and then spent that summer relearning to walk. Not exactly the ideal way to spend your 21st year.

I wish I could say things were all better now, but almost 20 years later I have chronic problems from the surgery and everything else.

If I had to do it all over again, I would have chosen a different way to deal with the issues that lead me to that place.

I spent 4 days in labor with my daughter because my stubborn cervix refused to open. My OB finally rigged up a urinary catheter to, literally, crank it open.
I couldn't do an epidural until the last 10 hours.
It was worse even than the 4 gall bladder attacks I had when I was 22; but I would do it all again a million times over for that little turnip.

Your posts are so incredibly real. This one made me actual feel pain in the pit of my stomach. What I like most about this blog is how real all the thoughts and emotions are. And while you speak the truth so vividly, the words used are minimal lovely strokes of a paint brush covered in words. It is truly a gift you and your daughter both share.

Pretty sure you're pain wins but, I've birthed my fair share of kidney stones and that is far from pleasant.

I have trigeminal neuralgia. (that's the main nerve tree in your face, starting behind your ear, one branch and one branch above your eye, at cheek and at chin level sorta) It's like that red hot searing pain, and it didn't stop. ever. Until I found a medication that worked on controling it, the pain was horrendous and literally made me gray. I lived on dilaudid for a while. It took a few years, but I found relief - and not the morphine kind. If this medicine continues to work, and my body doesn't suddenly decide to metabolize it and I am left wide open -starkly to that nerve's firing, searing insult on my face(and inner ear, neck sinus, eye socket etc. all that "face" entails) I will be ok.

Yep, I know that pain. I bore three children - piece of cake compared to TN.

I can see where your daughter gets her literary prowess from. Seriously, you should have a blog of your own.

sorry dad...as soon as I read "so that I can try to write my book" in the intro I had visions of seeing your girl on the TODAY show doing the PR for it...you go Susannah! PS thx for stopping by- you're too funny.

Papa Petunia,
You are one amazing writer indeed. And I am thrilled to see guest posts - I miss Susannah but LOVE that she is working on a book!

Great post! I don't know how he does it.

My worst physical pain was kidney stones which were faaar worse than childbirth.

My worst "other" pain is my father using my blog as a dating service. Yes, he is available. And his screen name for comments is hej (his initials). His phone number is... naaaah.

I can't figure out how much of pain is fear. But I have a suspicion that fear drives the measure of pain we feel.

I've always wondered, if fear was taken out of our grab bag of emotions, would things hurt as much ? both physically and or emotionally.

Natural childbirth was painful, but hip replacement surgery, followed by just 3 days in the hospital before I had to be home caring for my 3- and 5-year old kids (in a 3 story house) was FAR worse.

My dear HEJ, although I firmly believe that long-distance relationships have the best chance of survival, I fear that never meeting you could spell doom for us. And I apologize for causing your daughter any pain, physical or psychic. I'm sure you don't need a dating service. . . because no matter what, damn, you are good looking.

yes, it is official. I love it here. I agree with what so many of the other comments already state - you are a wonderful writer. Your posts are so soulful.

The most intense and absolute worst physical pain that I have ever felt has been heart ache. My childhood sweetheart left me for someone else when I was 20 years old. I thought I would die from sadness. I couldn't get out of bed. I had known him since we were 2 years old. ugh. When I finally got over it it was like a light was shining on me. I mourned that relationship in the same way that many people mourn death - and it is a death in a way but it seems to hurt more knowing that the person is still alive and not loving you anymore in the way that you so desperately love them still. Years later I actually did experience the death of someone close to me. First my grandfather who was one of my best friends. And, I've mourned the death of two dear friends, one who was killed on September 11th and another who died of a brain tumor when we were merely 26 years old.

I have thankfully never had physical pain to the level that some other people have had (although I do have chronic back pain due to a pinch nerve) but I would never wish these feelings of loss that I've felt on anyone.