*My deep apologies for the light postings this week but my husband has leprosy. Or maybe it’s toxic shock syndrome. Gout? I don’t know. The point is he is leaking from every mucous membrane and yelping as if I have accidentally stepped on his tail. Keep in mind he does not actually have a tail but if he did it would be stuck deep between his legs and quivering a feverish little shake, a lap dog nervously piddling on the carpet when the doorbell rings. Sick men are the most pathetic creatures known to (wo)man. 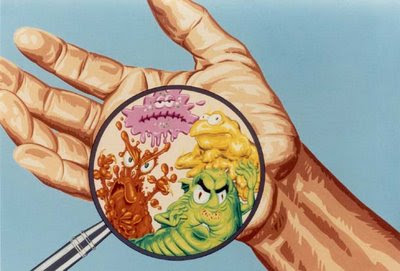 Yesterday I tried to quarantine him to the couch. I gave him some fluffy pillows, a roll of Charmin, a glass of water and the remote. But when I got home from work it was apparent that he had escaped. Wads of toilet paper littered our bed. A trail of toast crumbs speckled the keyboard. There was a glass of spit on our bedside table. A glass. OF SPIT. I reminded him it was trash night and that he needed to take the cans down to the curb but he said he was too sick. Then not two minutes later he asked if I wanted to do it. I eyed the thin thread of spittle that stretched from his mouth down to his chin as he said it and politely declined the invitation. Later that night he complained that I was being mean to him. This after I had made him chicken soup, cleaned up the kitchen, dosed him up with Tylenol PM, tucked him in and lit a candle scented like Hawaiian Maile Vine. I'm not being mean, I said. I just know that next week? When I come down with this cold? And I think I am dying? Next week you’re going to have sailing practice or the surf will be good and I will be stuck here with a miserably sick toddler and all the plouffy toilet paper will be gone so forcing me to blow my nose with one-ply. Besides, I said as I left the room to go watch **The Hills, I lit you a scented candle to fall asleep to. And from the hallway I heard a most pathetic small voice say, You lit that candle for yourself. And darn it all if he wasn't right. Because every time he exhaled I thought for sure he had farted and the wall of pillows I had built around him would never pass any real scientific tests on germ warfare. Back soon with something more compelling. *And here I must wave off the demons of sick. Because you know that’s how it works, right? Things like leprosy, they have nothing to do with actual germs or viruses or cells dividing and everything to do with you taunting them. So hello leprosy, go away gout. I highly doubt Bryan will ever fall victim to TSS but if he does pass out one day in a public bathroom stall we know who is to blame for not reading the insert in the box of tampons. Moi. **I would be remiss if I did not mention that I could barely watch The Hills this week so distracted was I with Lauren's mustache and Audrina's overly white/blue teeth. WTF is up with that???

Oh that sounds exactly like the sickness that takes place in my home.

I love your Bryan-when-he's-sick stories. They're the best!

I work in the ER and your husband sounds exactly like a Somali woman when she gets pregnant! You'd think they've never heard of morning sickness. They spit over and over into a cup and call it vomiting. Maybe that will get him to buckup. Ha.

lol boys are big babies when they are sick and that is that! I was also a little distracted by Lauren's moustache...I hope he feels better soon??

Have you ever seen The Man Cold video?? It's dead on.

OH MY GOD. I would rather have 5 sick toddlers than one sick husband!! The martyrdom, the sad puppy eyes, the STENCH.

and I'll be brave enough to tell you that I have noticed the same on the Hills. The bravery being that I just admitted in public that I watch the show...

God I hate it when men get sick. You hit it right on the nail. (don't hit HIM, you will never hear the end to the pissing and moaning!)
Meantime, you can carry large jugs of water strapped to your head, a water buffalo and a toddler and climb a stick ladder to your hut, but he can't pour his own Nyquil correct?

ahhhhh. Take care, wash your hands and Zoey's, drink some orange juice and throw away your toothbrushes. (or shake a box of Lucky Charms around and hope for the best!)
I just got over the first of the flu season-so I'm with sympathy.

While i completely understand and empathize with you (god only knows I've been there), i'm not ashamed to be the only one who comments on The Hills. What the f! Lauren, shave already & Audrina, someone needs to tell her to give her big flourescent teefies less airtime!

AMEN, sister! What about when you get sick first and are expected to suck it up, but when he gets sick with the exact same thing, he says "but you didn't feel as bad as I'm feeling! I have this worse than you did." Jesus.

It's about time someone called Lauren out on her 'stache. THANK YOU.