I just came across this image at Design Crush who found it here. If you're in the mood for some inspirational tidbits and tasty recipes, head on over to Design Crush. 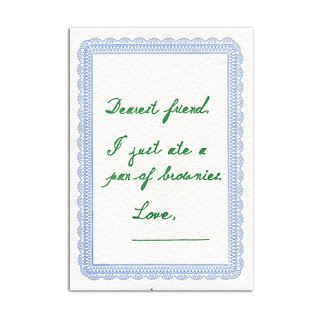 But of course that's not entirely why I'm re-posting this beautiful piece of letterpress. Nah, I bring it up because it reminds of this one time? Our friends Alex and Melanie used to live right on the Great Highway at Ocean Beach in the city. Bryan used to keep some of his surfboards at their house so he didn't have to haul them around the city if he wanted to surf after work. So one day he goes to Al and Mel's house and they're not there, they're already out in the water. But they had given Bryan a key so he let himself in to get his board and wetsuit. He was feeling a little wobbly--remember, he is diabetic. His blood sugar was crashing and he needed energy to surf. So he spotted a platter of brownies on the counter and he gobbled them up. All of them, every last one. Have you ever seen a diabetic with low blood sugar? Next thing he knows he's paddling out to surf and he hears the waves. Actually listens to each molecule of water as it crashes over his head. He feels his heart pounding and the clouds overhead are looking at him suspiciously. He thinks he might be having a heart attack or possibly a psychotic break; somehow he manages to paddle back in where he collapses on the beach and just lays there, breathing. Hours go by, or maybe it's just a few seconds. The sky overhead is laughing at him and one black lab won't stop sniffing at Bryan's head. Finally Melanie comes in from the surf and finds Bryan sprawled out on the beach, still in his wetsuit and probably developing a bad ball rash, a skinny beached whale that they might just have to bury there in the sand to decompose, a rancid gelatinous mess sheathed in black neoprene. She couldn't figure out what was wrong with Bryan until she finally asked him if he had eaten the brownies in the kitchen. Of course they were pot brownies, and poor low blood sugar Bryan had eaten the whole pan without knowing how very special they were. If only we had that beautiful letterpress stationery to commemorate the event but no, all these years we just had the story, which we've told over and over and over, a story which is now made public to you, my dearest friends. Love, Susannah

Now I didn't even eat any special brownies and I don't smoke pot yet here I am, paranoid as all get out. Are you being sincere Anonym ous, or are you mocking me? :)

so funny, but of course scary, really, but the possible ball rash mention caused me to do one of those snorty type laughs here at my desk (at work), not pretty.

That story cracked me up! I bet he learned his lesson after that!

I think I may have pee'd my pencil skirt. This happened to my future father-in-law, he came to the house someone had given us pot brownies and they had been sitting in the refrigerator and he helped himself to them. We kept asking him how he was feeling, he kept see-sawing from, 'feeling great', to 'being rather hungry'. He still asks for those brownies whenever he comes to town. Your post was great....

omg, that is hilarious. i mean, it probably wasn't at the time? but the way you tell the story - hilarious.

having been married to a diabetic, yes I know the low blood sugar eating.

the fact that they were "special" is just even more perfect